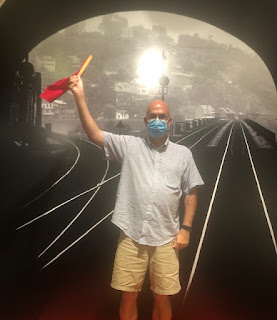 I know you're all dying to axe what we did on vacation.
I'll get to that at some point, but we did take a few days to get to our final destination.
I'm apologizing to Cookie, I'd say in advance, but really in retrospect. We came through - and stayed ! - in Baltimore one night. It's been ages since I've been to anything but BWI.
I didn't even give Cookie an opportunity to turn me down to meet up for a drink. I wasn't thinking - so, I am sorry for not at least trying.
But 710 is a Maryland boy, so you can take him out of it, but can't take it out of the boy. Yes, something about that line is very very dirty. I get it.
710 is also a railroad boy.
He loves me almost as much as he loves trains. His maternal grandfather (his namesake), who died well well before 710 was born, worked on the railroad.......all his live-long day. 710's license plate is the demarkation of the caboose where 710 Sr worked.
There are tales of the depression, when 710 Sr. would throw coal off the train to the poor families who would come to the track, during winter, so they could keep warm.
And in Baltimore - unsurprisingly enough - is the B&O Railroad Museum.  And since he loves me, almost as much as he loves trains, I agreed (not even begrudgingly) to go.  There is also that connection of Baltimore (he) and Ohio (me).
Naturally, we got there an hour before it was supposed to close. Bother.  AND it was like $20 per person!
That all said, the museum is a beautifully restored roundhouse.  It might be sad to say, but after three and one half decades together, I know what a roundhouse is.  In that B&O roundhouse are some beautifully restored trains. 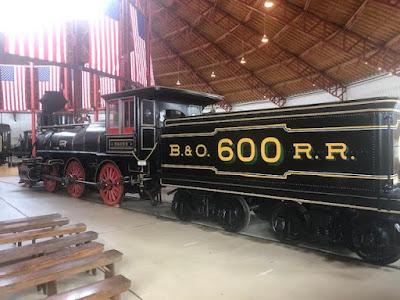 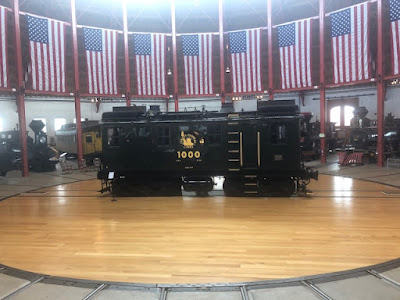 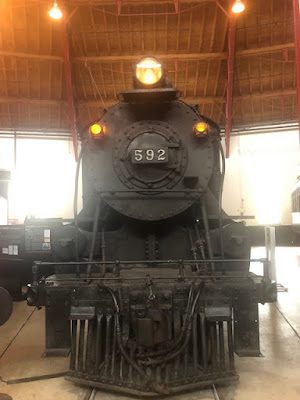 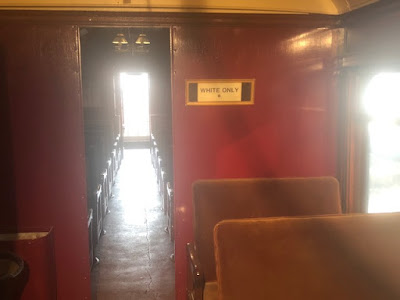 So I got husband points (which can be redeemed for absolutely nothing!) for going.
After that, we went to our Fells Point boutique hotel, which turned out to be - ta da - the old B&O tobacco warehouse. I got zero points for that, because he picked the hotel, though he didn't know the history of the building.
B&O was nice, but according to a woman in the lobby, it is not near as nice as the railroad museum in Strasberg, PA.  I'd say I'd have to see it for myself to judge, but...............you know...........
Song by: a-ha
Posted by Blobby at 12:07 AM

You are a good man Blobby, and when 710 is happy, everyone is happy. I love sacrifice , you also look good with your flag and 🩳 shorts. Glad you got away.

Been there, seen that, it is nice. The museum in Strasberg, PA is nice, they also run a steam excursion. There is a larger train museum west of Chicago. Toot Toot

I am here when you get here. And trust me, I understand travel in and out.

I had a cousin - David - who grew up in Marion, Ohio - a train town if ever there was one - and worked for the railroads for decades. In retirement, what did he do with his boyfriend? They took train tours, which all had a "hat" theme. So I get the train fixation.