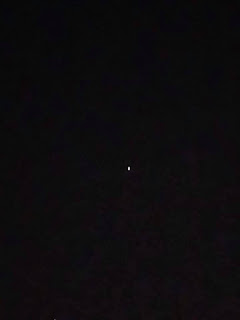 Saturday. evening, 710 got some message that the International Space Station was flying over the 216 later that night.
Actually, a few times this week, each later than the last. But this non-school night it was at 21:51 and would / could be seen for eight minutes.
We made the plan to trek up to the top of the street where there is a school and open field where we would have a more open view and better chance at seeing the ISS.
We left, in my opinion, far too early. 10 minutes. It takes two to get there. But I was fine. I was probably a bit cranky as I am usually in bed before 21:51.
As we get to the end of our driveway, dragging Shep with us, we ran into a young neighbor couple (Zach and Lauren) were walking their dogs. We told them where we were headed and why - their response was funny and weird:  "no it's NOT!  .....you're making that up!"
Aging Gay Space Nerds are not telling tall tales.
We both went on our way.
Like clock work - as I do believe NASA has this down pretty pat - the ISS comes over the tops of the trees at exactly the point they said it would.  It was awesome.
It moves at roughly 17,500 mph, so it kind of trucks across the sky.
We had a clear night, which was great. I have missed celestial events as of late due to clouds. Saturn being so close. A comet whizzing by, etc.
I barely saw some blinking lights on it, and yes, it is that bright dot in my picture. We didn't think enough to bring binoculars. Perhaps next time.
Not the next day, which was the next time - as that came by after 23:00. I can no longer do that easily, let alone on a school night.
But Sunday morning while walking Shep, I ran into Zach and Lauren again. Both thanked us for the 4-1-1. They went home, checked out wild claim to find it to be real - and went out to watch themselves.
If in their backyard they didn't get the full expanse of sky, so Lauren did go, "that was NOT eight minutes!".  Trust me, NASA has done the math.
Song by: Neil Young & Crazy Horse
Posted by Blobby at 12:07 AM

Youngsters, what are ya gonna do except be greatful you are in a stable relationship with a fellow believer and constant source of amusement. 710 gets big credits from me for his organizational skills and knowledge. You get big points for tenacity and your passion for music. I could never listen to as much as you. I like my current car because it is so quiet inside. Thanks as always Blobby.

Nice, and yes I have met a few of the rocket scientists who have done the math, they are good, some of them can even figure out a medical bill.

Our neighbor always texts us when the ISS is flying overhead :-) We watch whenever it's clear.