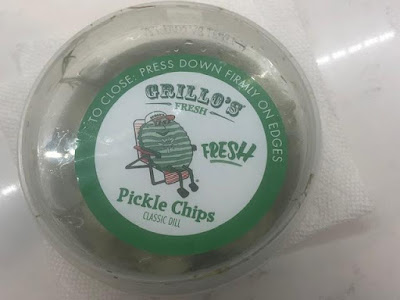 This might only be of interest to folks from the Land of Cleves, and even at that, a certain faction.

There is a deli in Cleveland, well, Beachwood, call Corky & Lenny's.  Most Friday nights, I'd end up there with my parents. None of my sisters ever went. I mean - ever. I suppose they had lives, though knowing them, I know this to be false.

If there wasn't a table to be had - and it was ALWAYS packed - we'd sit at the counter. The same waitress always served us. Chinese with Crystal Gayle hair. I was totally amazed by her. Years later - hell, decades later - she was still there, but with short greying hair.

The food was good, though my father never altered a meal. If he could get an open faced turkey sandwich, the man was set for the week. To me, it didn't matter what was the on the menu, or my plate. I was there for the bowl of pickles they put at every table.

Oh, I'm 99.99999999% it was completely unhygienic, but it didn't stop me one little bit. The garlic was overpowering - which is probably where I got my love of garlic in the first place. I'd easily finish off the entire bowl before food actually arrived.  I'm not even sure I went there for the pastrami. The chopped livers, yes.  The pickles - way yes.

Anyways, after a health inspection and a temporary brief shut down, Corky & Lenny's was never the same, as the pickles weren't put out the same way. I still like the place, but.........it was different.

When buying pickles though, I do try to stay away from the Vlasic. So on a whim, I bought these Grillo pickles at a local grocery store, Heinens.

OMFG.  It's Corky & Lenny's in a cheap ass, leaky container (after you open them) - only cut into chips. 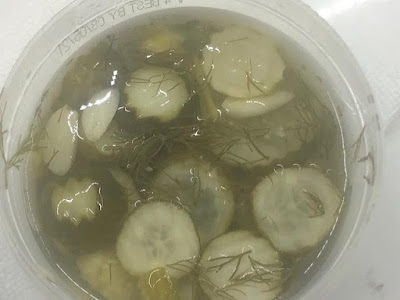 Hunks of garlic.Bunches of dill. A great brine!

Some people are transported back to their childhood by the likes of something like Rock Candy or some such nonsense. THIS is it. The ultimate.

I'm not ashamed to say I've eaten three containers in as many weeks. It would not be uncommon for me to come home from work, go to the fridge and eat like 5-6, even before saying hello to the husband. I mean, the dog greets me at the door, so he gets a 'how do ya do' before the pickles do.  Of course, I eat the garlic too.

If there are some left over, they might make it onto a sandwich or a hamburger.  Maybe.

I see that they're sold at Costco, so for you mega mart shoppers, pick 'em up.  Cookie - you might have a local-ish way to get them. Tell me I'm wrong after you have them.........I dare ya.

Simple pleasures in life are the reason we trudge on day after day. Good for you, glad it wasn’t bottles of Grey Goose. 😊

I have a crock getting pickled on the kitchen counter right now, fun and easy to make, a in home fermentation. Store bought or made by yourself, they are so good,

I agree with you, Corky and Lenny's in not quite the same without those bowls of pickles. I also know exactly which server you are referring to. She was very brusque as I recall. Sally (Meredith's aunt)