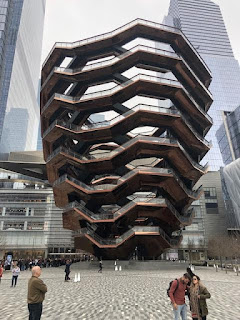 We were lucky enough to get tickets to the Vessel - an MC Escher-like structure - in Hudson Yards back when it opened in March 2019.
Oddly, it had only been open two weeks, but we got our timed tickets and climbed and climbed.
What we didn't do was jump.
And it seems we might some of the few who haven't.
Ok - a slight exaggeration. But at least four people, including a 14 year old, have jumped to their deaths since the Vessel opened to the public. And apparently, other architects had warned the designer and builder of this probability at least three years prior.
At the beginning of the year, the NYC attraction closed for months due to the other three suicides. The 14 year old took his life at the end of July, two months after the site reopened - that allegedly had new safety measures. The Vessel is now currently closed.
Part of those safety measures if having a buddy. No one could come alone. And now there is a $10 entrance fee, which I dare say, make me chuckle a bit.
I mean, if someone is really intent of killing themselves, I don't think the idea of parting with a sawbuck is going to be the thing that makes them go....."huhhhh.......better not.......".  And for the record, the 14 year old was with his family - so the buddy thing did not work, and they were still out 10 bucks.
Yes, I am being flip.
Architecture might provide opportunity, but it's not the impetus. If not the Vessel, then jumping in front of the F train might have been scenario #2.
On the 8th - and top - floor of my work parking garage there are vague signs on calling for help if you feel distressed. It doesn't mention jumping, but it's inferred.  Floors 5, 6 and 7 have no such signs, and it's just as easy to jump from there and I'm not physicist, but I'm thinking the fall from there is no less lethal.
Sign, nets and phones placed on the Golden Gate Bridge. I don't know if those cut down on people jumping - and if so, by how much - or if it's just a liability loophole for the city.  I think if people have the notion, they'll find the means.
The bigger issue, we as a country has, is mental health resources. Lack of. And lack of access to. It is so prevalent and such a stigma that it just seems to perpetuate itself until there is seemingly no alternative - other than killing oneself or taking out a bunch of strangers with a semi-automatic rifle.
I enjoyed my time at the Vessel. It wasn't an outstanding experience. I wouldn't even classify it as great art, but it was present and it intrigued me. 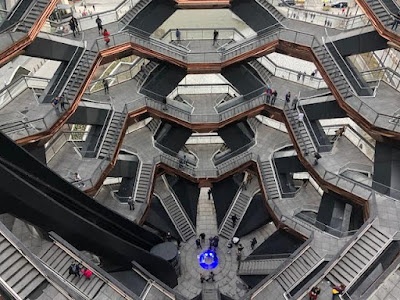 I'm 100% certain I will never experience this again. Either it will be closed, dismantled or modified so much for safety it won't be what it was in the first place.
I get it, and yet I don't.
Song by: Nine Inch Nails
Posted by Blobby at 12:07 AM

I saw that under construction, I wonder if it will be open later this month?

I say , we wonder about the stupidity of these occurrences. How many total tourists have visited this place and three or four have jumped.
150 million people are refusing vaccine . I remember as a child when the papers were local and the worlds woes weren’t forced into our house every day. I realize the design is different but there is kick ass fencing and security at the Empire State Building. Cover the damn thing with chicken wire or tear it down .