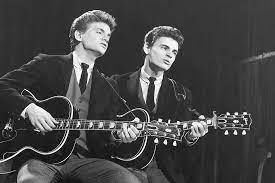 Sorry to see that Don Everly passed the other day.
Whether you were a fan or knew of the Everly Brothers, they undoubtedly had an influence on artists you like.  Or if you're young young, artists you like were influenced by older artists who were influenced by the Everly Brothers.
Their two part harmonies were inspirational to the Beatles, Simon & Garfunkel, Gram Parsons & Emmylou Harris and countless others. The brothers were in the first induction into the Rock & Roll Hall O'Fame.
Beginning in the 50s it was just the two of them, before band members got added, but they had the hits with "Bye Bye Love", "Cathy's Clown" and "All I Have to Do is Dream".
Their last hit was in 1986, the year they were in inducted into the Rock Hall............and it was written by Paul McCartney.  Until then  - or there abouts - the brothers had not performed or recorded together in more than a decade after a falling out.
So, while the Everly Brothers were even before my time, I certainly appreciate what they did for music in the bigger picture.
I'll leave you with their last "hit", "On the Wings of a Nightingale"
Song by: the Everly Brothers
Posted by Blobby at 12:07 AM

I recognize some of this ,It’s rare to say it ,but they were mostly before my time too. I guess I’m more the Righteous Brothers.

I remember their first hits happening - I was 10 when 'Bye Bye Love' appeared - as clearly as I do those of Elvis, who'd begun charting a year earlier. The unique harmonies were part of the soundtrack to my childhood years, the don't-want-to-forget part.

I could never remember which of the brothers was the Republican and which the Dem. My googling confirms that Don was the latter, two years older than his brother who died 7 years ago.

I love the Everly Brothers for that pristine, sibling harmony. Beautiful.