Just Be Good to Me 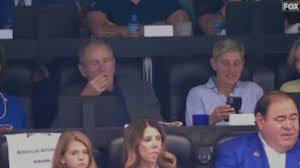 Since I cannot (yet) bring myself to address that three ringed circus we have going on in DC, I figured I could at least rake Ellen DeGeneres over the coals.

She and Shrub were seen at some sportsball event together.  People went apeshit. And then Ellen had to go and and lesbiansplain it to us:

Oh Ellen, so am I.  There are times I'm a bit frustrated with my Facebook friends. Some of them are deeply in the red - and I don't mean in the profit and loss area, unless you consider they can be morally bankrupt for supporting BLOTUS.

The difference is, those friends didn't start a war knowingly based on false information, just to get us into a war. And one where 4,000+ US troops died as did 65,000 (!!!!) Afghanis. This goes against moral bankruptcy, it is - and should have been - a war crime.

With BLOTUS in office, I totally get it's easy to think that Bush wasn't that bad. It's tough to remember what a vile piece of shit he was - and I'm sure still is.

I'm with Ellen in the spirit that we are all different and can, and should, understand and discuss that of which we might not agree, but let's face it, there are degrees.  I would almost bet $47 kerjillion dollars, she would not have sat in a skybox watching a Buffalo Bills game with OJ Simpson by her side - and he only killed two people.   .......that we know of!

I'm sorry Ellen, but trying to gloss over this with feel-good-love stuff doesn't cut it this time. It's not boycott material, per se, it nothing else, because I've never actually seen anything but clips of your shows.  It's is a reason to banish your stupid-ass game show.

You can't dance your way out of this one.

W ran a presidential campaign seeking to deny Ellen and Portia the right to marry, and has NEVER apologized for that.

W botched the Hurricane Katrina fiasco in new Orleans which is Ellen's hometown.