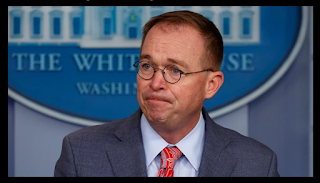 The current Chief of Staff - which is the 3rd one? 4th? - out and out admits to the quid pro quo allegations and that BLOTUS was involved.....DURING A PRESS CONFERENCE!

So what's the end game with this?

My guess - it's to normalize the behaviour that goes on at 1600.  Well, to continue to normalize it. This is no longer to send up test balloons. It is a calculated effort to anesthetize the public to their unethical, if not illegal, business dealings.  They're hoping when / if it comes time for impeachment hearings that people, including congress, will shrug.

While clearly it is the worst case scenario, it's also the reality.

What a fucking depressing turn of events........which says a lot during this administration.

I agree it was done to make it appear like it was no big deal.

That was my Anne Marie impression for the day!

I says a lot about our nation and the people therein.