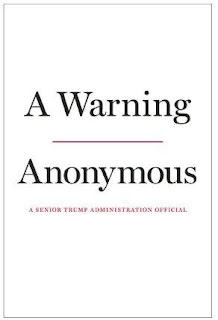 Oh, how I am awaiting for this book to be published.

For context - for those of you who might not keep up with the news, or for historians who read this millennia from now - a book is to be released by someone who is currently in, or possibly no longer in, the current administration.

The same author - gender unknown - wrote an op ed for the New York Times a year ago, which said they were part of the resistance within the White House.

At that time, everyone was "ohhhh, who could it be?".  Jared? No, not the 6" Subway guy. Kushner wishes he had 6" or any kid interested in him.  Pence?  No - he only writes about bunnies who don't have to bake wedding cakes for guinea pigs.....or something like that.

I mean how much would it suck if any of those three became some hero by spilling these beans?

The author did not take a 7-digit advance and is allegedly donating most of the profits of sales to charity, so they're not in it for the $$$$.

Unfortunately, for the author, they might get beaten to the punch in regards to bringing down BLOTUS, now with the top US diplomat to Ukraine tying this quid pro quo thing directly to BLOTUS and Guilani.

I am all in for folks truly chipping away at this presidency.  And if things at 1600 start to break apart like ice in the Arctic, so be it.

I'm totally ordering a copy of this book.

I don't think it's smellyanne cuntway either; the dead can't write.

I hope it makes a difference.