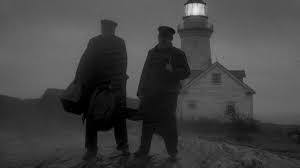 We went to see the Lighthouse on it's opening weekend.

Rotten Tomatoes said it had a 92% rating.  From the critics.  78-ish% from the viewers.

Let's start with their genre for the movie, according to IMDB.  Sorry.  Genres. Plural:  Drama, Horror, Science Fiction, Fantasy.

Still, it's four genres because.........while not quite all over the place, it just kind of defies description. And there are parts that are fantasy / dream sequence, but after a while you're not sure if what you're seeing is part of the dream or the reality.

While now reading reviews (you know me and that), the LA Times called it "a blistering funny squall of a film".  I don't know 'funny' applies, but don't expect there is a comedy in here anywhere.

Set in the late 19th century, I couldn't tell if they were in New England, Canada, the UK.  Allegedly the film is set in Maine.

Cedric Diggery Robert Pattinson's accent never quite stood still. There was a time I thought he had to be from Ireland, and then just the good ole USA. He mentions Canada, so who the ef knows.

There are mainly two characters - anyone else is just fantasy......or are they? - working together for what is to be four weeks at a lighthouse out on a solitary rock. Still, time in a remote place isn't time at all - there is almost no accounting for days, nights, weeks or months. The isolation of it all seems to lead the keepers to madness.

There is some foreshadowing of that, when told that the last wikkie (lighthouse dude) went insane.

The Green Goblin Willem Dafoe is a little more stereotypical of a seaman.  ....hehehe....seaman.  Beard, hat. corn cob pipe and the sailor / pirate speak, straight out of Melville (whom the filmmakers thank in the ending credits).

Both he and Pattinson have some great monologues. Dafoe doing the longest - and he. never. blinks.

Of all the discussions and arguments they have, the one that seems to hurt / register with the Dafoe's character is that the younger wikkie doesn't like his cooking. He seems heartbroken.

After reading a dozen or so reviews and few hilarious articles with the director / co-writer, no one ever mentions Pattinson's character refusing alcohol until his supposed last night on the island. He claims it to be against the rules, but even I figured there was more to that.  Once he drinks, it's not far till the wheels come off.  And both characters trip into madness.

A lighthouse can be symbolic of strength, solitude, a beacon or a big old penis. In a way, it is all of these things in this movie.

If you read the reviews, they're all over the place on the 'meaning'. But that's why it got a 92% from critics. They think they're smarter than the average movie-goer and are artsier than us fartsy guys.

The movie is filmed in black and white and in a square frame. Allegedly, this is to make you feel right there - with no where to escape in viewing. That actually works - whether you like it or not.

Interesting tidbits from movie:  they built their own 70' lighthouse. Existing ones were not at the right locale and were working, but they said they couldn't get a tracking shot they needed, and couldn't afford a crane.  Wait. Couldn't afford a crane, but building a lighthouse was in the budget??  Clearly I don't know the price of crane rentals.

I'd put this movie somewhere in the realm of the Lobster, but just in terms of uniqueness / weirdness. I'm not sorry I saw it, but it's tough to recommend. But I can say, I won't see a more unique movie this year than the Lighthouse.

I'd not heard of this, which isn't so surprising as it's not due to open here for another THREE months. Yes, end of Jan 2020! It does sound intriguing, though, and if I get the chance it'll be on my now culled-down list of films to be seen.

I should have said, it wasn't bad. I hesitated to recommend it due to the left-of-centerness of it. That is for most of my readership. I totally expect you to see it. :)

I definitely will see it should the chance come my way though it does sound rather typically like one of those 'limited release' films, which sometimes here means 'London only'.

Maybe not. It's playing at a number of theaters here - main stream cinemas and the art circuit.