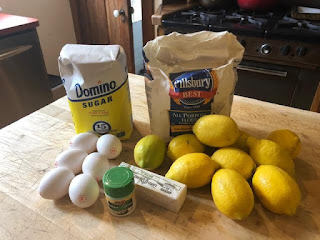 It's been a million years since I've had a cooking segment, and you'll still have to wait for that. This weekend, it was baking.

It was our annual block party, where one brings a side or dessert.  We (read: I) opted to go for the latter. I couldn't think of a side that was original and I wanted to try out an America's Test Kitchen recipe for lemon squares.

Yes, I KNOW I'm on a diet, but just because I make them doesn't mean I have to eat one. Truth be told, I sampled a finger full of filling when I was cutting them, just to make sure they didn't suck.

As you can see, there are not many ingredients. It's not horribly labour intensive but it does end up using a few bowls.


Just an FYI. I had salted butter at home, so I didn't add the salt they called for hoping it would even out. I think it did? 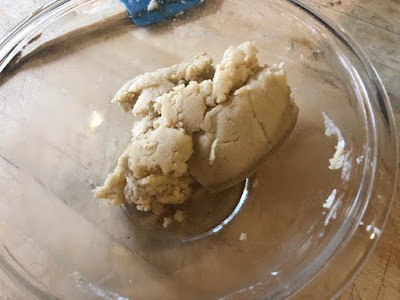 Whisk together the flour, sugar and salt, then add the melted butter and incorporate everything. I actually forgot to whisk, and yes, I think it made a difference, mostly in the taste of the crust. 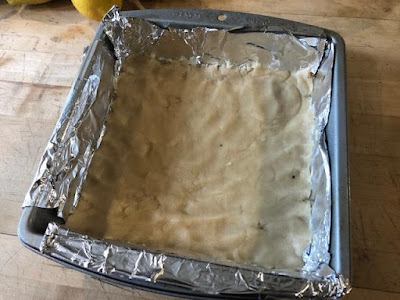 In an 8x8 pan, with a foil sling (easy to get the bars out this way - and keeps pan 100$ clean! - spread the dough, making an even layer at the bottom of the pan.  The dough was way easy to work with.

Place in the pre-heated oven for 19-24 minutes to get golden brown.  Then take out. 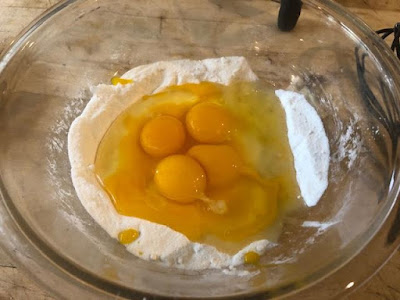 During that cook time, whisk together the flour, sugar and cream of tartar. Add the eggs and egg yolks and whisk until smooth. Then add lemon juice and zest. Whisk some more until combined.

Squeezing the lemons was probably the most time consuming thing of the recipe. 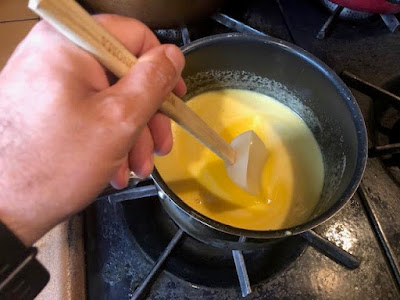 In a small sauce pan cook over medium-low heat, stirring constantly for 5-8 minutes until the mixutre reaches 160 F.  Should you not stir, you might just have cooked eggs.

Take off the heat and add the butter, stirring it in until it melts. The cold butter will so help cool down the mixture and help it stop cooking.

Put mixture through a fine mesh strainer in case there are any curdles (mine had them) and to get rid of the cooked zest. 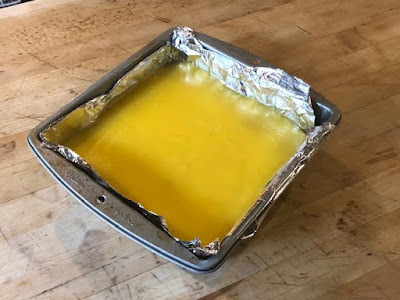 Pour into pan. Move pan around to get the mixture in an even layer over the entire surface.  Place in the 350 F over and cook for 8-12 minutes, until set, but still a little jiggly in the middle.

Let it cool in the pan for at least 90 minutes, room temperature.

Lift from the pan via the foil and cut in even pieces.  You're supposed to cut it into 12, but we cut those in half even so more of the block party folks could have them. 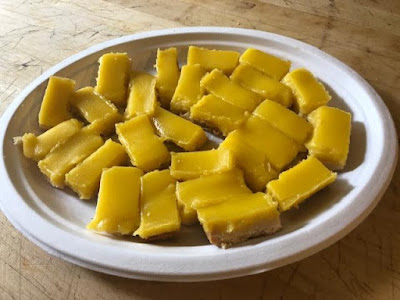 The lemon tasted very good - what little I scooped off the knife.

Oh yes, clean off your blade between each cut. The dough was firm and you could hear the snap as the knife went through it.

People at the party liked them. We had a few left over which I wrapped up and took to work. Those folks really liked them.  Some day, I'll make them again, where I can eat them, but until then, the diet continues.
Posted by Blobby at 12:07 AM

I too would enjoy such.

The recipe is called Lemon Squares but it looks like you made Lemon Rectangles. ;)