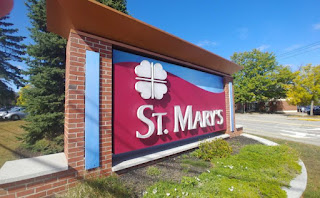 I have very little today.

That in itself is kind of a-mah-zing, as you know, BLOTUS and Full Mental Meltdown x 2. Honestly, from what little I could stand to watch, it was quite a site, but not enough to touch on.

A more interesting, and still eff'd up one, is a faith based hospital (read: Catholic) what I would say went against any CMS, HIPAA and G-D laws that there are.  Three years ago!!

St. Mary's, in Maine, had a "wall of shame" where some of the workers posted medical records of disabled patients - including information of the genitals and bodily functions.

I guess, it IS a BLOTUS America now.

For the life of me, I don't know why it took another worker (now former worker) there three years to spill the beans.

The complainant said the 'wall of shame' stayed up for months after she informed hospital leadership. They denied that and said it was taken down within weeks !!!!!!

St. Mary's?   I think the correct answer should have been:  "we took it down immediately!"

For that answer alone, you're at 100% fault.  You're a podunk hospital in Maine, but you should be sued and fined out the wazoo for this.  All people involved - including those who did not take it down at once - should be terminated.

As it stands, one was fired. One suspended.

As someone who works in the healthcare industry it kind of blows the mind. Apparently they have never heard of HIPAA. I would think the CEO should be handing in their resignation STAT.

FIRE EVERY MUTHAFUCKA THAT VIOLATED HIPAA!

just say NO to catholic hospitals; da jeebus gets in the way. we like the jewish hospital (Einstein); caring people that do not give a flying fuck about religious ooga booga.

Another "What on earth were they thinking?"