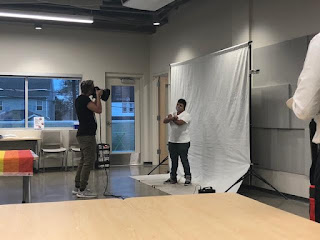 Besides being just a great organization on its own, my friend, Chef Bob, used to be president there for a number of years. And the work I did at CLAW was so that the money raised would be donated there - but to $20,000 per year.

710 and I also give them money annually.

They not only do a lot with at risk youths, they're branching out as us gays age. They are looking at what this looks like, housing, healthcare, etc for the elderly gay population. I'm sure I'll need all that info in the next 19 months.

Anyway, the Center was doing a fundraiser using the NOH8 campaign.

NOH8 was founded back around 2008 around to push back against California's Proposition 8, which was to ban same sex marriage.  The campaign is something you've no doubt seen:  people being photographed in white shirts, against a white background with the NOH8 tattoo on their face, with a piece of duct tape over their mouth. That is to symbolize gays being silenced. Many of the pictures in the campaign having the subjects peeling off the tape.

Since they were doing a two hour photo shoot in the CLE, I felt the need to be a part of it. If Facebook is to be believed - and it's not - 120 people just who were on that platform said they'd be there.  Uh-huh.

Blobby got there 15 minutes in. There was one person getting their photo taken and two ahead of me. And it would be a bit before there was someone after me.

Yes, just me. I tried to get Chef Bob to go with me, but he had plans. 710 - well, he isn't much of a picture guy, let alone one that would end up on social media. So it was me, myself and I.

As I came straight (ha!) from work, I just used the t-shirt I had on under my dress shirt. They had someone apply my tattoo and then another to apply my duct tape. 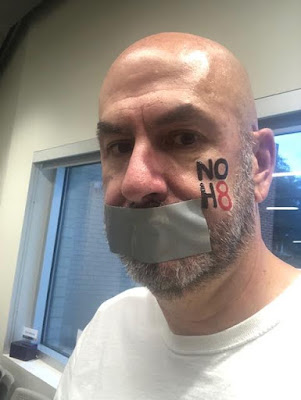 This is not the official photo.

I haven't seen the official photo(s) yet.  The photographer took about 10. I say he was good at giving directions, but with over 56,000 having participated in this, even though I'm sure he didn't do all of them, that he's got a rhythm down.

I felt comfortable doing it, mostly because there was no one else there. Also, I've done way more public things for this blog, and over the years, that trepidation about taking a picture somewhere for said blog, has just gone out the window.

As there was no one waiting after me, after he gave me a hug, he showed me one or two. I was very happy with one of them. It is unclear if they'll send all 10 or so to me, or if they just pick the one that THEY like.

I also am unclear on when I'll see them. But it sounds like 4 weeks, which seems insane, as they're digital.  But they're doing these sessions in Columbus and Cincinnati immediately after. Maybe they'll come sooner should the attendance be not what they expected.

I'm sure I'll show the finished product once it comes my way.  ....and I like it.

it must have hurt getting that duct tape off.

but what really hurts is LGBTQ people still being silenced for being who they are.

It did get rid of same sex marriage in CA until the Feds stepped in. The Mormons were huge supporters of it, as were many "minority" churches, and yes the irony of that was not lost on the Gays.

It was a crushing blow to Community in CA since it happened at the same night that Obama was elected. Again irony!?

How much facial hair to you have left after that tape came off?

good for you two to donate and be part of this.