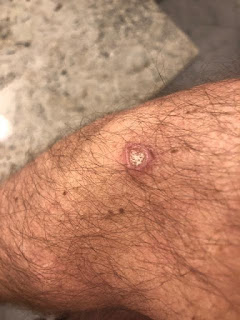 Well, it's official:  no skin cancer.

The pathology came back a week after they scooped the moles off my body.  They say it's "all clear". I got no more 4-1-1 than that. But I suppose I didn't need anymore.

So, now instead of a mole or two, I'll have a scar or two. That's fine. I have so many scars at this point, what's another two.

It looks like someone burned me with a cigarette while trying to get Rush off the radio station in the car.

What I did get was the message to come back in two years for another thorough mole search.  I suppose I will. I suppose I'll have to make the appointment soon - as you'd know if you ever tried (and I stress the 'tried') to get into see a dermatologist.

YAYZ! shep and sophie have their daddy around longer!

Thank goodness. I’ve had several on my bad removed. You have to be vigilant with this stuff and stay covered.
JP