So, I had an appointment with a dermatologist on Monday. I'm not fond of this service line, as when I was in my teens and had horrible acne (and bacne), for four years I saw him monthly with no real improvement in my appearance.

Only on the one visit right before I left for college did he mention I shouldn't take the medication I'd been taking for four years with milk.  I religiously took the medication ever morning after eating a bowl of cereal.

But with aging, one seemingly gets skin tags. Lovely.

I am vain enough to want them removed, but motivated enough to have it done. Until the other day. One just popped up, but sat right at my shirt collar level.  And it was like 1000 knives stabbing me at once. So I made an appointment to have it removed.

Oddly, in the four days between calling and going, the pain had stopped. But I went to the appointment anyway.  I still wanted to talk about them, but we got sidetracked.

As is normal with me and any doctor's appointment, things don't always go my way. They rarely do.

I've had mole checks before, but none this thorough. They looked head to toe.......and I mean EVERYWHERE.

They found two "suspicious" moles - which is a fucking miracle. I have a ton of them. Honestly, I have no idea - if you could see them - how you'd know if any of them changed.

Still this is one of them......minus the circle. 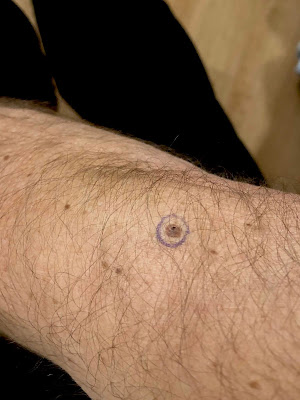 You can see a dark spot in the middle of the mole. So, they dug it out and sent it to pathology.

What I am annoyed with is, I still have the skin tags and we never got around to removing those.

Anyhoo.......after I hear from them, I'm sure I'll give an update. But it's always reassuring that got to go to the cancer center to get this done. Always a positive boost!

hope all turns out OK for you. you and I are both cancer survivors. and I really should have a derma check me out for weird things too, but...

I hate skin tags (well, who would like them?). All this weird stuff that grows as we get older: yuck. I'd rather all that growth energy be channeled into a few more inches. Take that any way you'd like.