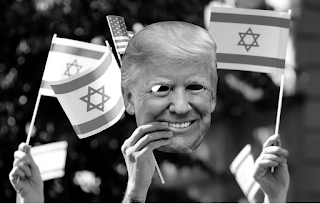 Can we just try to ignore the 'chosen one' comment? I don't care in what context he was using it.

And can we try to forget the stupid fucking ass Greenland purchase?

I do find it sad that his staff actually has to back him up and go on air and say that this is a real thing.

While I'd rather not focus on it at all, but we shouldn't ignore BLOTUS' stance on Jewish loyalty.

I know some people are making the stretch of Hitler's "the Jews are not loyal to the state".   It's not the first nor last Hitler reference to come his way.

But this is just a gateway comment to sooooo many things - and none of them will end up well.

I totally get there are some Jews who support BLOTUS - and I'm guessing it's mostly due to Israel, or they're big-assed bankers. Deep down, I'd like to think they have to know he has streak of anti-Semitism running through him.

How does one reconcile white supremacists and neo-Nazi's are 'very good people' and not condemning shooters of synagogues or the guys who are building up to do a shooting - and pulling a voting lever in his favour.

But the quotes set these gun-loving, Jew-hating white men (I mean, it's not even generalizing, is it?) to "punish" the "disloyal".  It's damning, it dangerous, and he knows it, as does his staff.

Why do Steven Miller, Ivanka and Jared think they'll be spared from the "I hate Jews" brigade?  I mean, I think they do think that, but that's not quite the way it works.

BLOTUS is ramping up to something. Maybe it's just 2020.  His 2015 kick off was about Mexicans being rapists and murders. Now that he's got them deported or locked up in cages, he's doubling down on the Jews.

Honestly, if you're not afraid yet, you should be.

the dump also thinks he's "the second coming". BITCH PLEASE! he can't even get it up to come once!

I think he he has lost his tenuous grasp on reality. We should start a movement to sell Texas to Denmark, they could use a warm place as a winter resort, they can have Ted as part of the deal.

Someone is getting sooooooo desperate he'll say ANYTHING! (Mind you, that's been his behaviour since before Day One anyway).