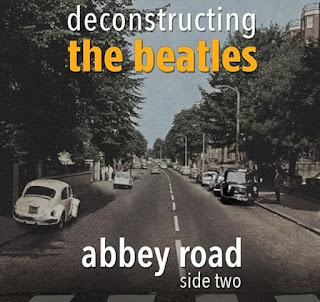 We saw this in a theater and paid for a ticket, so I'm counting it as a movie.

Last night, we went and saw a pseudo-TED talk on Deconstructing Abbey Road - Side Two.

This leads me to believe there was a Side One version, which there was. And then it turns out, this musicologist, Scott Freiman, had deconstructed the entire Beatles library in order of release. Or of recording. Abbey Road was recorded after Let it Be, but released beforehand.   I think I got that right - I usually screw it up.

I saw this was coming a month ago, I stored the date away in my man-brain and coaxed 710 to take me.

Abbey Road, to me, is arguably their best disk. Yeah yeah - Rubber Soul or Sgt. Pepper are great, no doubt, but some of the band's and George Martin's best work - or at least some of it's most ingenious. ...and that's saying something.

Side Two is really where it's at with the record anyways. Save for two songs, (three, if you count "Her Majesty"), the side is a medley, or segued together. How they recorded them - and re-wrote them - is why this side needed it's own lecture.

Freiman doesn't just break down the disk, but track by track.......and I don't mean song by song. I mean, each instrument, vocal etc.  And how the tracks were constructed.......or demo'd and became the final versions.

I had no idea much of it was abandoned or unfinished tracks tried for the White Album, and/or the 'Get Back' sessions (which became Let it Be).  Or how "Her Majesty" became the hidden track and how it was supposed to come after "Mean Mr. Mustard", but the band didn't think it worked. However, when they played it, I thought it TOTALLY worked.

Still, Martin is a frickin' genius, but the other members (maybe save Ringo) were all very experimental, though the band blatantly lifted from 1968 Fleetwood Mac and Iron Butterfly.  Even the breakdown of "The End" was amazing and you kind of forget that Ringo could actually drum. And well.

Now, a lecture / movie like this speaks to me. I am so familiar with the album anyways, but I love music and process, so the 'how it's made' part is perfect for me.

I'm interested in seeing the other albums. But if you like Abbey Road, and have a chance to see this, I highly suggest a viewing.

Never heard of this 'film' and would pay good money to see it. On IMDb only an American release is indicated (shame!) - so far.

I remember clearly the very day the album was released here (You're right - it was a few months before the already recorded 'Let it Be' was done, but that still awaiting Phil Spector to complete his dubious jigging around). I didn't waste much time at all in acquiring my copy and well recall the slightly deflated feeling that, although very fine indeed, it didn't QUITE touch the heights which Sgt Pepper had. I think it's fair to say that my view was pretty representative of majority British opinion. Although I'd still hold to that it shouldn't detract from its exceptional quality which even now has the ability to take the breath away.
The album came out as rumours of the rancorous quarrels between members of the group were flying around. Lennon had already said with evident bitterness that his songs should have been on one side of the record and Macca's on the other. (Quite where Harrison's two brilliant efforts and Ringo's oddball track could have been placed is conjecture) - though Lennon did also have the grace to say, before it was released as such, that 'Something' deserved to be put out as a Beatles single having, up to then, been largely dismissive of Harrison's songs. I still wonder that on both L & M's own individual tracks where we hear multiple voices, were they all multi-tracks of only either L or M's voice. And for the climactic 'The End' (which I do wish really had been the final track) was it all only Macca alone?

I do hope this film gets here an 'art-house' circuit release if it gets shown at all, otherwise I'll have to keep my eyes peeled for a TV transmission. ('Deconstructing Side 1' didn't get a cinema release here, only U.S.A. As far as I know it's not been on T.V. either.) I especially want to learn something which I already didn't know, and I'm sure there'll be quite a bit of that in this feature.

Not that anyone wants to purchase DVDs, but I think they're available there .

They do delve into the then relationship status where all were - and how much that Lennon didn't actually appear on the disk. Even Ringo only sang on one song on side 2. The one thing I forgot to mention in my post was the recording and release. That album was recorded in July and August 1969. Less than two months to put together such a complicated disk. AND it was released in September. A few years later, that could never happen in the music industry. The delay of ultimate sales potential and waiting for a marketing campaign. But they're the Beatles. Maybe no one cared about 'marketing'. The band couldn't even be bothered about a cover shoot - which is why it happened right outside the studio - knowing they didn't want to even attempt to schedule another time to do anything together.

RB - I was hoping you'd like this. I thought of you while writing it.

Thanks for "thinking of" me when writing this post, B. It'e rare when I can resist the temptation not to comment on the Beatles as I'd still nominate them, despite their many imperfections, as the 'greatest' group (whatever that means) that pop music has ever produced, and it continues to astonish me how there are now younger generations who have hardly heard of them, let alone not appreciating them - though I dare say that's as much to do with my own age as anything else.