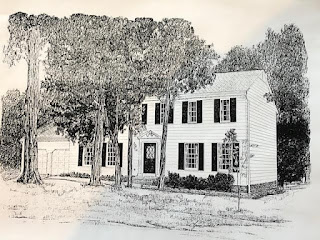 We are almost there.

The house I grew up in is about have new owners - almost six months to the day of us listing it.

The house just surpassed 50 years old, which in some ways is extremely hard to believe. It doesn't look what I think a half-century house would or should look like.

The sell process was painful.  My mother choose poorly when it came to a realtor. I had some frank and unpleasant conversations with her, both with my mother alive and gone. My mother was happy to leave these things to one of my sisters and myself. On one hand, I wanted / needed the house to sell,  on another, I wanted the contract to run out so she wouldn't get a dime.

We had a buyer a few weeks back who walked away. They claimed things wrong with the house, which in truth weren't exactly wrong - complaining about lack of GFI.  Well, yes. This did not exist 50 years ago. But it was a few hundred dollar fix. But they walked away without even a counter, so it was never really about the lack of GFI.  We invested in the change and we got this buyer.

So over the last week or two, we've been cleaning out.  710 and I were over this last weekend. We finished clearing the basement, garage, family room and dining room. 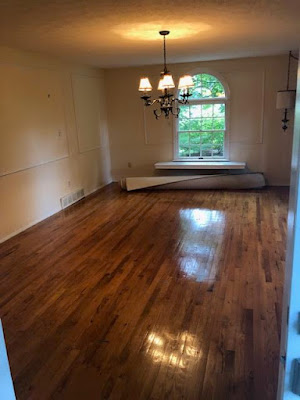 Former living room (which we were not allowed in as children) which became the dining room when the family grew larger with the on-set of grandkids. 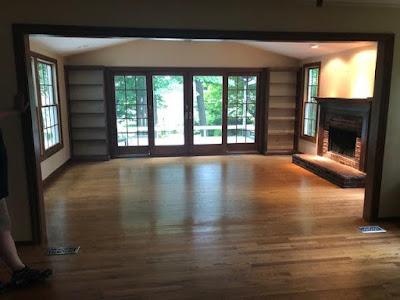 The family room(s). You can see the original end of the house, which then that second section was added on in about 1992.


One of my mother's friends, whom we adore, was bequeathed (well, by me) a few of my mother's pieces of furniture. When she and her family came over she spoke as if this must be a difficult time for me - with the letting go of the house.

I wasn't sure how to react. I know the correct answer would have been just to nod and agree, but in reality, it wasn't.  The last six months of the sale helped me lose any affection I had for the place. That and while I visited almost weekly for the last twenty five years, I hadn't lived there since 1981.  When you put it in to that context, I only lived there for 11 years.

As it is, depending on how we set up the pieces I got from that house, 710's and my dining room could end up looking a lot like my mother's. That might be weird.

When 710 and I left on Saturday, 98% of everything was out of the house - taken, given away, or tossed into a rented dumpster.  100% should be out by mid-week.  Then we will send in house cleaners to tidy it up for the new owners.

My feelings, or lack thereof, it is still end of an era.  I no longer have ties to the community out there, so no real reason to even take a drive through.  Still, it's closure, and that's ok with me.

Song by: Dixie Chicks
Posted by Blobby at 12:07 AM

Six months is a long time, yet it is time to move on. I never went back into my parents home, once I turned it over the cleaners, drove by, took a picture and kept moving. Someone asked how I felt about the new owners tearing it apart and remodeling it, the only thing I could say was it was about time someone did something with that kitchen, and redid those bathrooms.

my "parental units" sold their house last june to move to assisted living. it didn't mean a damn thing to me. I hadn't lived there since 1977. the house of horrors is no more for me.

move along smartly now, nothing more to do/see there.