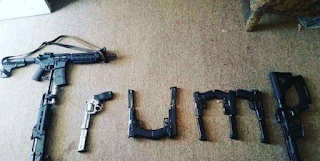 First off - I finally felt the need to add 'Mass Shooting' for my labels. It's a necessary evil, as this won't be going away anytime soon.

Secondly - the title image seemingly was pulled off the El Paso's Twitter account. I have looked but cannot confirm 100% of this. It's tough to confirm as Twitter took down his page as soon as they could.  That said, the image isn't his - but one from 2016 that he allegedly reposted on his site.

Thirdly - while I won't say his name that is spelled out, BLOTUS and his crew have their hands in both El Paso and probably Dayton too.

I was so fucking depressed by the two shootings this last weekend - 13 hours apart. And truth be told, I've been starting and stopping this post about a dozen times, not being able to commit to thinking about it.  ....and I just stopped again.

All of this is so same old-same old, yet it still feels different. Maybe it's the back to back thing. But really what it is, is the response thing.  I am literally - yes, literally - sickened.

At every single rally, her "boss" points his finger, name calls and screams. He does it with his keyboard too - using his tiny hands.  She has the nerve, the audacity, to tell people against violent assault weapon deaths to unify?

You twat, you and your ilk have done everything in your power to do just the opposite. With all these mass shootings, why can't you be in the middle of one of them?

Your father is their fucking ring leader. How do you not know that?  You're a faux Jew, and he's not too fond of the real ones. And maybe delve a little into history and Gooooogle "white supremacy jew" and see what comes up.  Twat!


Then there is BLOTUS himself. Let's forget he doesn't know the difference between Dayton and Toledo - at least they're both in the same state.  But his total and utter bullshit on his "Hate has no place in America. Hatred warps the mind, ravages the heart and devours the soul." crap.

This is a man who built his campaign and presidency on hate and divisiveness is trying to tell people not to hate.  Actions speak louder than words was my first thought. My second was:  what could this man possibly do, action wise, to show me anything different.  I could not come up with one thing.

He did the requisite: video games, internet violence and the classic, mental illness.

Of course, they're not mentally ill when they're brown or black - but we've covered that before at other shooting posts.  He also doesn't mention his rollback of laws, now allowing mentally ill folks to have access to weapons.  Convenient.

The absolute pièce de résistance is BLOTUS' willingness to support gun legislation.................if it were tied to immigration reform.

Flailing Dem candidate, Tim Ryan (I'm from Ohio, as is he, and I still barely know who the fuck he is), hits it on the head when he says "it's a joke".

I think we all know that he'd take the immigration concession and give nothing in ways of anything gun related.

....and don't even get me started on Moscow Mitch (g-d, I hope that name sticks for the next year and a quarter!) and his not allowing any gun reform to come up for a vote for the last year.

Blood on all their hands.

The shootings are disturbing enough, but the blatant hypocrisy is what makes my stomach turn.

Song by: Johnny Winter
Posted by Blobby at 12:05 AM

yep. I e-mailed my 2 senators and 1 rep today and I got down and dirty and ALL CAPSed them.

I asked toomey if he would pull out his balls on the senate floor and defy mcturtle and the rest of the pricks who are complicit in this shit. he won't cause he has no balls.

I also told them to stop taking $$$ from the NRA if they are serious about ending the violence. bet they won't do that either.

Over here, as in the 'sensible' sections of U.S.A., the reactions by (almost exclusively) the Repubs to the massacres is nearly as jaw-dropping as the tragedies themselves. :-(

You are too kind in your descriptions of Kellyanne and Ivanka, we lack words to describe how we really feel. Moscow Mitch fell and broke his shoulder over the weekend, you know what they say about older people and bad falls.

oh please, Mitch threw himself down a flight of stairs to change the new cycle about him. I don't believe his "injury" for a second.