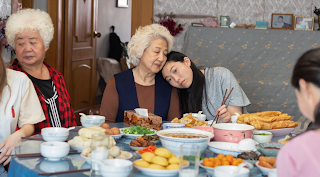 Last evening, we went to see the Farewell. We had free tickets the night before we left for vacation, but we passed on them,
well.......because we were leaving the next day.

I knew the premise of course - a dying grandmother, where people go back to China to visit her under the premise of a fake wedding, because Nana doesn't know she's dying. And no one is planning on telling her that fact.

What I didn't know is that the majority of the film would be in Chinese with English subtitles. I'm guessing only about 20% was in English. It is a story based on the director's life experience.

Awkwafina had good press regarding a non-comedic role and that press is well deserved. Her Nai Nai probably is even better. Awkwafina was mostly comedic foil (and singular bright spot) in Crazy Rich Asians and was probably crappy in Ocean's 8 - as from what I caught of the movie was crappy......though it had three Oscar winners in it - for what's that worth.

Like Crazy Rich Asians, the Farewell delves into the differences between American and Chinese culture, especially when it comes to the familial association. This is all done more with drama than comedic relief.

710 dubbed the movie 'authentic', which I thought was a good determination.  I don't know if Awkwafina will get an Academy Award nomination, but I can guarantee you she will be on the short list.  ....and it's totally deserved.

Song by: Alison Krauss + Union Station
Posted by Blobby at 12:03 AM

Never heard of it. Balder Half listens to books and reads movies. I'm the opposite.

that does sound a good movie.

Not heard of this as it doesn't open here for another 6 weeks. But on IMDb it currently has a devilishly high rating of 8.2 which is indeed high for that site. So with that and yours it's going to be a 'must-see'.