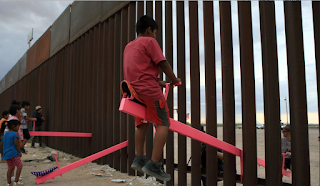 This is without a doubt the best image I've seen in the last week.  Maybe the last month

Border Patrol must be out of their fucking minds having to watch this, as no rules or laws are being violated.

I love that children on both side of the fence are learning and experiencing something positive. Something, that I have to believe will stay in their very being for the rest of their lives.

Someone might be able to put up walls, but it won't separate us. Some might try to pit one against the other, but {hopefully} in the end, kindness and compassion win out.

It's the Harry Potter telling Voldemort in the Order of the Phoenix that he's the weak one, and that he'll never know love or friendship.  It's like when Luke tells the Sith Lord he'll never turn to the dark side. It's the equivalent of Dorothy throwing water on the Wicked Witch of the West. It is Sheriff Bart and the citizens of Rock Ridge defeating Hedley Lamarr.

Yes, in this analogy, the BLOTUS administration is Voldemort, the Sith Lord, the Wicked Witch and Hedy ("it's Hedley!") Lamarr all wrapped up into one.

Cynic that I usually am, I still hope good wins over evil. And it really takes a bunch of kids teeter-tottering to show us this could be the case.

I truly like your non-cynical side. I second Anne Marie's awwww....!