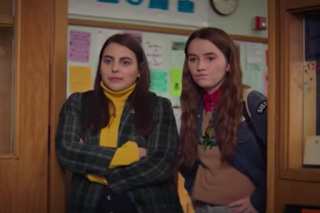 We did see Booksmart a few nights back. It was one of those movies we kind of wanted to see, but kind of didn't care if we saw it on cable.

We overheard an adult male, at our art theater, say a few months back that he saw it twice!

The NYT just listed their best movies of 2019 {so far} and Booksmart was on the list. It just goes to show you than the Old Grey Lady isn't always on point. Or it could speak to the sad state of movies for this year.

And now here we were, in a beach town, on a Tuesday night, with a movie that has been out for three months and probably shouldn't even still be in the theater. So we went. And we were the only ones who went.  I'm not sure we've been the only two in a cinema. Ever.

As suspected, it is a female version of Superbad, right down to the trying to get to the party, tand ending up at other parties, vying for one's crush, getting in a car with a perv, making a diversion with the police, and melt down amongst friends over college and the eventual make up.

It is not as raunchy as Superbad and it might be better acted - for what that's worth.

Beanie Feldstein is very good - and she plays every scene with gusto, pushing it to its limit, but never over.  I thought she was the best thing about Lady Bird, almost two years back. But I think her friend Amy, played by Kaitlyn Dever, was the stand out as the meeker, nerdier lesbian who has yet to experience anything female.

All that said, Olivia Wilde (and I hope she Gooooogles herself) is a horrible director. I'm not sure why someone of such minimal notoriety and talent got to direct a movie. It certainly can't be from a milquetoast performance in Cowboys & Aliens.

We both found parts of the movie ok, but overall, it's kind of a dud.  I'm not sure what the guy at the Cedar Lee was talking about, but I wouldn't have paid to see Booksmart twice.

I noticed that under my review of this in June you wrote that you "kinda wanted to see it", but clearly were of two minds. Well, now you know. I'm not sure if you'd go as far as me - in fact I don't think you would - in rating this the least enjoyed film seen so far this year. But even if you don't go as far as that I'm still perplexed as to why so many have raved about it. A 'generation thing' I can only surmise.

No, I won't go to say it was my least enjoyed film so far. I might leave that to "Late Night" or "Hail Satan"....in that order.

'Late Night' being (possibly) your least enjoyed film of the year up to now? I've just sifted through and found that there are 11 films so far to which I gave a lower score than 'Late Night'. But then I suppose I've seen a few more films than you've managed - though that could change, who can say?

I won't even go see this a first time, let alone a second. Never heard of it. I find that I've never heard of quite a few of the movies you and Raybeard have seen. Probably because I save the big screen for superhero and action stuff. Quiet movies I save for television. Movies cost too much. I did finally watch Bohemian Rhapsody. It was okay, but it felt like a made for t.v. movie. Glad I waited for HBO. I guess you can't go by me. I preferred Dominic and Eugene over Rain Man. Still do.