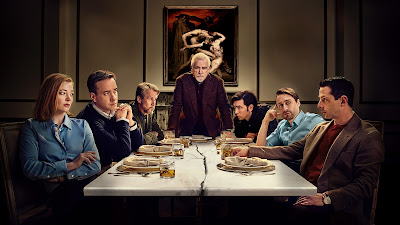 With all of these, and the half dozen more services set to launch in the next 6-12 months, is is possible to be an "out of work actor" anymore?

The food industry is going to go bust if there are no servers waiting for their big break.

So the irony is the show I'm watching is on HBO.....it's not television. Technically, you can stream shows there. But you can't stream the entire current season of anything. You still have to wait for your weekly dose, which just find for me as I don't have the attention span for 'binge' anything.

I can stream season one of Succession, because, well.......I never heard of it before a week or so ago. Currently, we are on episode 2 of season 2.

The premise is simple: mega rich media family with an elderly patriarch contemplates stepping down and needing one of this four kids (from three different marriages) to be the successor.  None of them have Australian accents, so I'm 11% sure this isn't fictionalized Murdochville.   {insert eye roll emoji here}

That said, it probably isn't far off from the Murdochs, but possibly more entertaining.

The oldest son is Cameron from Ferris Bueller.......and......and.........we'll he's probably done something else. Possibly.  He doesn't seem to be interested in the media stuff, so he's not as complicated (at least yet) as his siblings.

You have the female (don't know who she is but I like her). You have the disappointing son - always trying to please dad but never achieving it - with the drug problem.  And the youngest, who is the cockiest, and who also is played by Macaulay Culkin's brother (and yes, I had look up how to spell both those names).

But back to streaming. While it doesn't seem like you have to see season 1 to catch on to what's goig on, we assume we're missing some of the relationship building. So in the week between new episodes, we are slowly getting through the first season.


Honestly though, if you have to watch Murdoch, take in Tracey Ullman's take  on being Jerry Hall being married to Rupert. Hilarious.

We are currently obsessed with Dark on Netflix. Slow start, but so worth it as it builds.