We now have a grown up dining room.  14 years later.

When we moved to this house, we brought our present set with us. It served us well in the other place, but in the new one, it didn't quite fit in, yet we saw little reason to up and change it.

Tables themselves are no big deal. I mean, they are, but compared to what chairs cost?  Yeah, the table isn't the investment.  It's seating where you pay the big bucks.

As it turns out, there were both tables and chairs coming my way.  In the last year or so of my mother's life, she was having us kids chose things we might want. I really wanted very few things, but one were the chairs.

I had no use for 12 of them, but they really are a set. They were hand-carved by my great-grandmother's second husband.  I know! Divorce and remarriage in the late 1800s or early 1900s.  I also have a breakfront from him, via my grandmother. It was given to me like when I was 10. Every kid's dream present.

So last week, when we cleared out the house, we rented a truck and moved a big-ass heavy table (wayyyyyy heavier than I ever anticipated) and a dozen, substantial carved chairs.

Honestly, we just dumped everything at home, as we were wiped and just needed to get the truck back. But as of yesterday, while I worked (yes, on a Saturday), 710 did something he wasn't supposed to do alone:  get the new furniture into the house and reassembled. 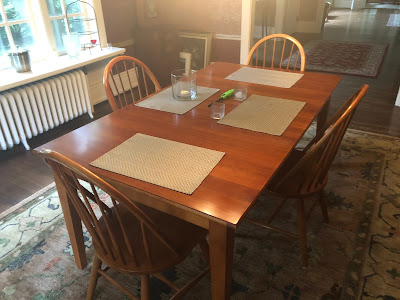 Actually, I liked our old table. It doesn't quite make the leap to 'formal', but it is in excellent shape and we used it often. The chairs?  I could have lived with just about anything else. And look! We have a measly four chairs!  Oh the shame.

The carpet we bought before Expo (the failed Homo Depot design store) as they went out of business. It was probably more impulse purchase than it should have been. 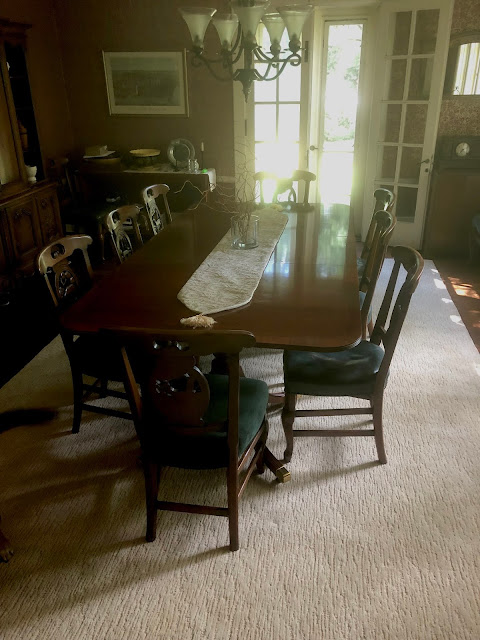 It looks amazing. Though we did not put in the additional leaf. We can add it for a party or something, but for most use, it is fine.

The wood colour is darker, but we swapped out the rug for one in my mother's dining room. Both items totally change the look of the room and both of us couldn't be more pleased.

The carpet matches our baseboards and window seats and the other carpet was busy, but so was the wallpaper, and it didn't work. Now it does.

Oddly enough, even though the carpet, chair and table were in my mother's dining room and now in ours, there is enough difference where it's familiar but doesn't look similar.

We are grateful to my mother for this gift. It's one of those things we will thing about her each and every time we use it.

btw...in the 'after' pic, you can see a glimpse of the breakfront of which I mentioned.

bad 710 for moving that by himself!

but OMB, night and day! the new frock has made the dining room cozy and inviting. you will have to throw a party for the "new room".

Nice table and chairs. I have the chairs from my grandparents' dining room set from 1926. The table was given away in the late 60's

Very elegant and classy! Hick that I am, I had to look up breakfront. Never heard the term.