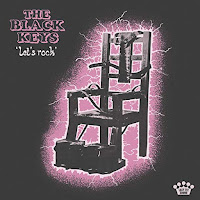 I'm slipping this entry in right under the wire, eh?

I alluded a month or so ago that the Black Keys were releasing a new disk, and poof, here it is: Let's Rock.

I like the Ohio born / raised duo, but I can't say I've ever loved them. They have solid disks, usually with 2-3 stand out cuts per release. The rest, while not filler also aren't extraordinary.  Let's Rock is no different.

There are cuts that I've compared to (favorably) to Neil Young & Crazy Horse circa Live Rust period - 1978-1980 ish. The music is "crunchy", which I love, but without the feedback that Young and crew insisted upon during that era.

I like the entire disk, though 710 might have made me like "Sit Around and Miss You" when we were driving it mashed it up with the Archie's "Sugar Sugar".  I dig "Tell Me Lies" and actually most of the songs.

Let's Rock might not be their best disk, but the Black Key use no keyboards on this disk. It's drums and guitar mostly. Written, Produced and Performed by the band.