Color In Your Life 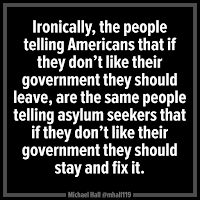 I have tried to stay away from political posts in the last month or so, but this administration is making it SO hard (and yes.............that's what she said).

The media had one job to do - and they failed.  Again.

The story on race and tweets and responses should have been the ONLY story of at least the first day.....if not multiple. But it's a 27 second clip on the big 3 networks.

Not one of them asking the questions of the GOP - to their face, with cameras in it - about why they don't speak up.  And regardless of the four who did, there are like 240+ who haven't - - - save the one asshole who said he was "a person of colour"........white.

The whole, America: Love it or Leave it didn't work so well in the '60s and doing worse now. Of course, it's the GOP "argument" now. Mind you, these racist didn't flee the country when Obama was at 1600 - so StFU.   And if we're not great again, why don't THEY leave, their "leader" included.

Eons ago, or so it seemed, I wrote (paraphrasing, bc I might be drunk),  while you might not be a racist, you have to be ok with racist behavior to tolerate whom you elected.

We are now past that. If you tolerate current behaviour,  you ARE racist.  Plain. And. Simple.

BLOTUS is no longer (nor has been for a while) anything other than a blatant racist. His failing, wannabe Aryan children aside, who aren't seemingly mortified by his behaviour at all, there are no barriers to his hatred anymore. It's not even cloaked in conjecture. 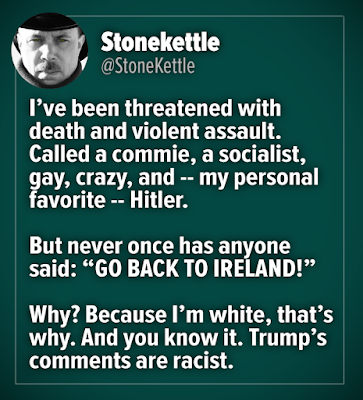 BLOTUS' comments aren't surprising in the slightest. The litmus test is and was - the response from his people, his party, his family.   So far it's been support, silence and silence, other than that twat Eric who says 94% of American people support his father.  I want to see the data behind his.  BTW, Georgetown University - your teaching methods are shoddy if he's coming up with data like this.

We had dinner last night with neighbors who are also friends. Piet is in his 90s.....and he is just devastated at where we are right now. It's true for all of as this table, though they chuckled when we all ordered 'white' wine.

Ok. Still drunk. But now I'm going to bed. Ironically, I have a 07:30 meeting on opioids safety. Thank g-d it's not on alcohol.

Song by: Missing Persons
Posted by Blobby at 12:30 AM

this country ain't great - it's regressed to the jim crow era. every person that supports the dump is a racist. period.