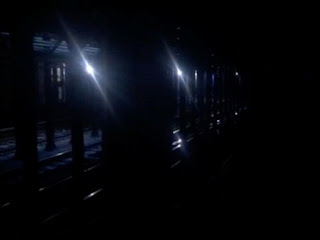 Times Square gone dark is like a dream for me.

It is the one place in Manhattan I try to avoid at all costs, which can be difficult.

Mind you, most trips there include a Broadway show, so 'avoiding' can be tricky, if not impossible. That said, I would go blocks out of my way to miss Broadway or 7th Avenue.

There were more friendly and sparser crowds at a Who concert in Cincinnati.

A friend who is visiting the Big Snapple was pissed, as he was missing the Cher Show, as it was delayed then cancelled.  So much for 'the show must go on'.  I'm guessing there is an asterisk with some disclaimers embedded somewhere down below that phrase.

He was not happy when I said a power outage to miss Cher would be considered "a win' in my book. I totally get the expense of the trip to miss that. I'm sure he'll be reimbursed for the tix, but not the rest of the trip, which he claims was the reason for going.

That in itself was disturbing to me.  There is no accounting for taste.

I will say, the streets being dark I could stand. The subway?  Ehhhhhhh.....not so much.  You can barely see all the rats in the light.

Oh, I just realized, Bob will have to walk up dark stairways to his hotel room, assuming they let them back in the building at all. And ugh - wifi is probably down.

Song by: Leonard Cohen
Posted by Blobby at 12:01 AM

It does seem unsettling. I think NYC would benefit from the occasional power-outage to remind people to be still for once.