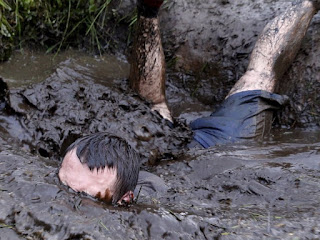 So there I was, about to start a hike, but I stopped to pee first. As it was hot, 710 and Shep were a few hundred feet away from the potty room taking cover in some shade.

I step out and try to make sure 710 doesn't let go of the leash to let Shep run to me. A. we are too close to a road for that.  B. I saw some hikers coming up behind me.  C. it was a new park and I didn't know the lay of the land.

So I take all of three steps towards them, and down I go.  Hard.  And in mud.

From all I can tell - I stepped in mud and as it turns out, it's slick. I honestly don't know how I landed, exactly.  I remember being on my back - as my ass was covered in mud. But so were the sides and front of my legs. I remember me putting my head back on the ground, yet not dirt ended up on my baseball cap.  Oh, and right below my palms were read and scraped. And I cut my knee.

So I don't know WHAT the fuck I did.

The couple of hikers I saw coming, were nice and asked if I was ok. Mind you, they never broke stride or anything. I probably was dismissive because in my head, what I heard them say was: "did you see that old man fall?"

It's true. In my mind, I'm not as old as I am chronologically. My body might be even older than my years in terms of wear and tear. But this makes three times in less than three years of me taking a fall. All spaced about 10 months apart. All not exactly minor - though this one should be the first to not put me in physical therapy.  WIN!

710 wanted to know if I wanted to clean up.  We are in a park without running water. What could I possibly do?  I shrugged it. We walked a few miles. The mud dried. The blood and the mud. Though I was careful on each and everyone of my steps.  We opted not to go down into the reservoir as it was steep. Getting down might have been ok, oddly, but climbing back out was unknown.

As I have found out with at least one of my tumbles, the aches come the day or two after. Right now, my right calf feels like a day after a really bad cramp. We will see.  I don't think I feel anything debilitating, other than my mind.

Email ThisBlogThis!Share to TwitterShare to FacebookShare to Pinterest
Labels: Accidents

Oh JEEEEEEZZZ!! This is the absolute PITS - and you were in it. Could it have been any worse? Can't be sure as yet, but PLEEEEZE not!!!
Apart from your physical condition what's it doing to your mental health? Words of comfort will seem futile but I do send you some anyway which may, just may, help you not feel quite as bad as you undoubtedly do. Trusting your next 'progress' report may show a slither of encouragement. Meantime, very best wishes to the wounded you.

sorry to hear this. at least it was dirt and not cement. do you think a medical exam is in order to see why you are a fall risk? we MAY have to wrap you in bubble wrap!

Falls are terrible and awkward and most people around never know how to react because reactions are almost always too slow.

Heal quickly! You want to be ready for the next one.

There is a bunch of data on falls and death, but you are a little young for that. My last fall was in 2015, getting spine fixed helped.