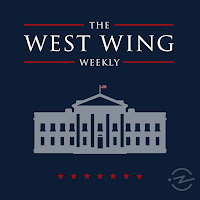 I am way way way late to the podcast party.  I just have never.  But now, you'll {probably} be getting a monthly 'what I'm listening to' post. This is going along to keep me posting politics or stop writing earlier than I'm thinking.

710 listens to podcasts all the time. He sets a timer on them to go to sleep. I didn't even know you could set a timer on such stuff. But why would I?

My current work space is as such, that it is encouraging me to use some bluetooth ear buds just so I can drown out the surrounding noise and chatter. After a few weeks, I got bored with just playing my music, so I thought - "hey, podcasts.....", as any normal cube dweller might.

IF it's the only one I listen to, this might be the only post I do on podcasts.

The premise is, as it sounds:  a breakdown episode by episode of all seven seasons of the West Wing. So, do the math:  7 seasons x 22 shows per season).  We are going to be here for along while.

Like Netflix, I can't binge these. One a day, should my schedule allow, is about all I do. I'm about halfway through season one.

Two hosts (one being Josh Molina, who played Will Bailey for 3-4 seasons) talk about the premise, play some clips and talk to folks who worked on that particular show: be it former cast members, writers, etc.  They talk about the actualities of DC and the parts of the show that are realistic (or un) and why that is.

Molina brings a little to the table, as he know Aaron Sorkin and has somewhat of a working of his brain. Molina also appeared in Sorkin's Sports Night (which is a pretty amazing show, if I say so myself).

The downside is: they like to talk They can veer a little off course, and timing is not consistent. Some run over an hour, some are barely over half of that. And maybe this is true with all podcasts:  commercials. OMG.   Yak yak yak about a product here and there.  I totally get they need sponsors as these things are not free, but once again:  has anyone ever bought any of these products ever??

I have a fondness for the show, so I'll stick with it. But since I'm not waiting five months (assuming I listen to one daily) do listen to another podcast, I'll be multi-listening and seeing how it goes.

The West Wing Weekly is free through iTunes.