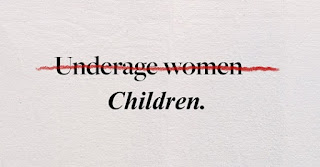 While I would hate to ever agree with BLOTUS, sometimes you just have to - though even with that admission, this won't go his way.

While it's not completely #fakenews, the media is doing an incredibly shitty job of covering the Jeff Epstein CHILD RAPE story.

You can say 'underage women' all you want. You can cloak it in 'sex trafficking' if that make is more palatable to your viewing and reading audience. But you're complicit in not telling the truth. Underage women ARE children.

While yes, the girls were 'trafficked', it was for the purpose of fucking them.  At best it's statutory.

You can put the word "alleged" before CHILD RAPE, as Epstein hasn't yet been convicted, but tell the actual story already. The courts let him off the hook one time already, don't let the media do it again. But you can do it with facts - it doesn't have to be a hack job.

Actually, if you have 11 minutes, you should listen to NPR's Here & Now.

The entire time is with the female investigative journalist who originally broke the story years ago. She paints a bad picture - for Epstein, for the police, of the prosecutors, and for the women. BLOTUS and both Clintons do not come off well either.

You can't expect BLOTUS to do anything about Acosta. I believe the Rapist Code is to cover each other. Maybe Rapist Brock Turner (oh yes, I'm linking that dirtbag so he gets more Goooooogle hits telling everyone he's a rapist!) can get a job in this administration.  His judge who let him off the hook should be up for a Federal or Supreme Court appointment any day now.

wonder how many other high-profile men (besides the ones you mention AND prince andrew!) are involved with this sleazebag epstein?