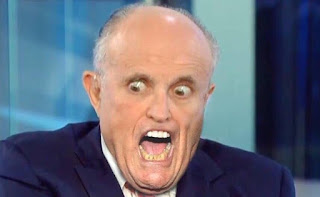 Ok, I'll be the first to admit - that is one fucked up, disturbing image - even if fake.  Semi-fake.

But Rudy Guliani is one fucked up, disturbing man.

A lot has been said about this last weekend's Meet the Press moment where Rude claims 'truth isn't truth'.

Of course it was an idiotic comment, but even I have to say, the media took it a little out of context. Still, he is a dork for mentioning trapped into perjury, implying that he either has to contradict a previous lie, or lie about a previous truth.

This is one of many many many stupid and inane things the thrice divorced ex-mayor has said since becoming BLTOUS' personal attorney.  (and yes, I felt the need to throw in that he's multiple time married scum-bag.....though the 'scum-bag' part was implied.)

To me, at least, this is all becoming increasingly clear:  you have a semi-unhinged babbling lawyer representing the man holding the highest office in the country - and a position in which he has most likely done some horribly illegal things.

What better way for an appeal your 100% guaranteed conviction than to say you've been represented by someone incompetent?

At one point, I figured BLOTUS wanted a some semi-name counsel. Now, it's just a certainty that he is playing Rudy and using him like he does every other single person he comes across (and no - there was no pun or double entendre there).

Normally, I wouldn't say 'good for you' to BLOTUS, but Guliani is as 2nd creepy as they come. BLOTUS is still #1 in that area.

Song by: Dixie Chicks
Posted by Blobby at 12:08 AM

'Truth isn't truth' coming from precisely the same family as 'Alternative facts'. Just what IS it with these people! Cheeses!!!!!!

LOCK THEM ALL UP!

When that is the best lawyer you can hire . . .

One of the scummier of the bags, and that's saying a lot!