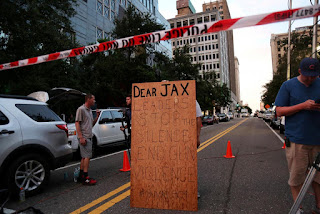 It has finally happened.

A mass shooting and almost no one cared.

Maybe it's because it happened on a Sunday, and folks were busy doing weekend things.  Maybe because it wasn't at a school.  Maybe it was because for eons "they've" said that video games causes violence and makes people kill people.

Or maybe, it's because it happens so often, no one truly cares anymore.

And it was a Madden Football Video game tournament. It wasn't a shoot-em-up, Grand Theft Auto thingy.  The chances are, if anyone was gonna die at a Madden competition, it would have been from Chronic Traumatic Encephalopathy.   .....or a DVT from sitting on their asses playing video games all day.

What do you do with white-on-white crime?  Politicians aren't engaged in that.  NRA ain't touchin' it.  Media didn't really overdo it like they do every other story.

This is the numbing down of America.

Well, dear heart, only two people were killed, one of whom was Black and it's Florida! It seems that more people have to be killed at one time for the NRA to even say "it's too soon to discuss gun control".
I'm really not that cynical, I'm just tired.

In some of the circles I lurk in people are taking this hard. It is a big, big deal.

I noticed that. Maybe we're numb or just don't care or maybe the media isn't excited about this one since there's no obvious politically unpopular group to blame.

The "breaking news" of a mass shooting has become the car alarm of the 2000s. Nobody cares. Very sad.