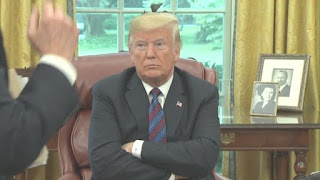 Truth be told, I love how petty BLOTUS can be.

His crossing of the arms and refusing to answer questions about John McCain like the petulant child he is.

I mean, I don't know why people wanted BLOTUS to sing McCain's praises. Had he, it would have been phony and everyone asking him those questions would have said as much - so to BLOTUS' credit, why get caught in that?

But where he fails is in recognizing his years of service to the country. You don't have to say good or bad - just be factual. BLOTUS can't do that. Mostly because he can't even think of being so diplomatic, but that 'factual' thing will trip him up every. single. time.

The entire flag goes, flag goes down routine was a killer.  You just expected someone with a slide whistle standing outside doing the up and down sound effects to go along with it.

Allegedly there was some poll about Dems and GOPers liking McCain - and the Dems seemed to like him more - a lot more.  I only saw 'results', not the data source, so I immediately discounted the entire thing. But considering some senator I've never heard of before, or will again, though McCain should have been nice to BLOTUS.

I don't condone the BLOTUS-hate.  But McCain?  He was no gem.

The quote was about, and directed to, his wife.  In front of the press.  After she "joked" that he needed a little more hair on top of his head.


Then there is this misogynistic bon mot x 2.

FYI.  Chelsea was 18.  Ready to, or just had, graduate high school. So way to be a bully, John.  Oh and way to disparage women and transgendered folk.

I finally realize why McCain brushed off BLOTUS' crude comments about him and never fought back.  He couldn't.  He is just as dismissive, rude and disgusting as BLOTUS.

The emperor had no clothes, so to speak.

CHEESES! Just LOOK at the body language! (top pic) - More eloquent than his tongue will ever be.