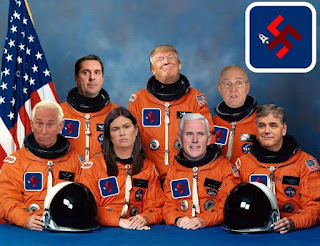 The government doesn't do anything that quickly.

For fuck sake, they're currently talking about a government shutdown over budget shit, but this we have $$$$ for?

In 2015, pre-BLOTUS (nahhh....he was still the biggest liar of the U.S. back then) said we'd be building a wall (payment pending), and I am still waitin' for that to happen.

Like the Emperor before him, Michelle Pence believes space belongs, or should belong, to a single entity. I think we know how that all turned out for Palpatine.

Of course, none of this is truly going to happen.  It's all distraction. From what exactly, I'm never sure.  Mueller is probably the main selection. But we still have the budget, education, anilingus with Putin....well, ON Putin.  You know Valddy didn't go cave diving, tongue first.  At least not on BLOTUS.

As for the cost of Space Farce (not a typo), I'm glad the GOP are such fiscal conservatives {snark}, as the closest cost estimate is "billions".   I'm not quite sure, nor is anyone else, if that is one billion, or one dollar short of a trillion.  It's kind of a wide margin.

Here's hoping by 2020, we know these folks won't be here anymore.

In the pic, front row extreme left, is that Frank Drebin? It figures.

LOL. I don't think it's Leslie Neilsen, though not sure who it actually is.