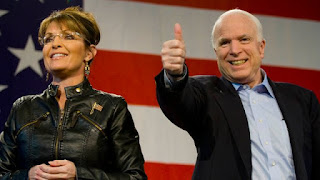 Well, I was just in final stages of drafting my blog post for today when John McCain died.  I guess that's another thing he did to annoy the fuck out of me.

If you're looking for a sympathetic post here today, you''re looking in the wrong place.

There is a good part of this current political mess that is the result of McCain and his idiotic pick of Sarah Palin for his running mate.

Civil and political discourse headed right for the drain once that team was set. He unleashed Palin, her massively fucked-up family, her built-up legion and the propaganda machine (FOX "news").  She pushed along the dumbing down of America - and yes, it's McCain's fault.

If not for him, she'd be an unknown ex-Alaskan governor still living in Alaska.

I will watch the news with their glow of him......speeding over his foibles and focusing on his positive attributes.

People will say how brave he was to vote against BLOTUS' healthcare bill. And in a way he was, but so few remember in the next go-round he voted FOR it.

And for the love of g-d, would someone please tell me what made him so 'maverick'-y?

He never really worked outside of the political norms. Yes, he teamed up with a democrat a time or two for bipartisan bills, but lots of people did back before he helped divide the country back in 2008.

Sure, he seemed like a voice of reason when Shrub was in office or with this current administration.

In those two instances, Ted Kaczynski would be a voice or reason.  All you have to do is put two sentences together and you have all over both those guys.

Sorry for his families loss and all, but I'm not broken up by this by any means. And there is a silver lining. Without McCain, the GOP is down to 50 members in the Senate.  If all 49 Dems refuse to participate in roll call, there is no quorum, which means no votes. Which means, no supreme court nominee to go through.

Unfortunately, the Dems won't have the gonads to do such a thing.

Now we get to see what new fuck-up Arizona will elect to represent them. While I thought next to nothing of McCain, I can almost guarantee you their selection will be worse.

The only good thing I'll truly say about him is that he planned his own funeral and invited former, but not current, presidents.  Ya gotta love that rub.

I can't watch the news on TV canonize John McCain now. He tried to turn the 2008 election into a high school popularity contest -- that is until Lehman Brothers tanked and took the whole economy with it down the toilet. At the time high-level meeting were held at the White House, and it was reported that John McCain sat there and didn't say a word.

I don't think he was a "maverick" either. He went along with the Republican cant shoulder to shoulder with the rest of them.

I have nothing good to say about mccain either.

I take a similar but not quite as harsh view of the man and your dim view of who AZ may look to have replace him. His wife has been floated as a possible replacement to serve out the remainder of his term. Personally, I'd prefer his daughter, but I think neither is likely since Gov Ducey doesn't have the balls to appoint anyone who isn't firmly in Trump's camp.