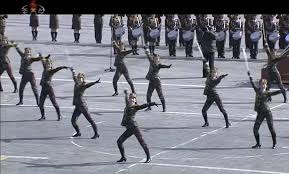 I love how the American Legion is balking at the price for a fucking military parade for BLOTUS (which looks like might be postponed - but honestly, how did it get this far?).

The price is the factor. Not the fact that no only did BLOTUS not serve - because let's face it, we are kind of getting to the point where a president wouldn't have been in the service - but he actively avoided it with the possible lamest freebie ever.

You know, he could have just told them he was gay.

The price for said parade increased from $12 million to $92 MILLION.   Dollars. Real ones. The same kind of currency you had to pay to attend BLOTUS University. ....and for an outcome that is just as meaningful.

If I ever ever ever ever hear a republicunt tout anything with the words, 'fiscal conservative', I will literally spit in their face.  .....and I'm not talking saliva, I'm talking the bringing up of the off-coloured phlegm and putting a nice big hawker right on their puss.

I know if must take a certain kind of ego for a man (or woman) who wants to be president, but honestly, this totally takes the cake.

he needs a parade like I need another asshole. the pentagon should have told him to shove his parade up his fat white ass!