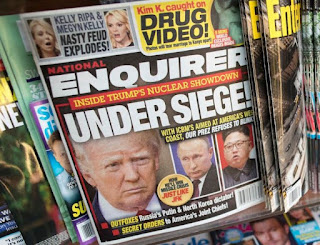 As much as I enjoyed the Manafort - Cohen shit show last week, how delicious are the immunity deals going on with the head douche of the National Enquirer and (t)Rump Organization CFO?

The latter is especially worthy of note.

This is a man who has allegedly been privy to every single financial transaction in said organization (please, don't make me come that close to spelling out you-know-whose-name again).

To me - and I'm really just talking as a Law & Order expert, of course - immunity kind of more than implies knowing and doing something bad, but you're getting off scot free because that knowledge is worse for someone else.

So the inference would be that someone in law enforcement had enough on CFO Allen Weisselberg that spooked him enough to make a deal.  The true beauty of it is, of course, that aforementioned organization is not just BLOTUS' problem, but his ugly fucking kids too.    Oh oh oh - and he also handled all the household expenses for the family! SCORE!

Oh, it would be a shame to see them go to prison, which would most likely be on state charges. And if I'm not mistaken, state sentences are not pardonable by a president.  Oh no. So sad!

The Enquirer could be interested, but his web if lies he publishes could raise reasonable doubt for just about anyone. But this isn't about what he's published, it's about what he has not. The stories he paid for (or someone did) only to kill them.

One is already out there.  BLOTUS had an affair and child out of wedlock.   </eyerollemoji></end eyerollemoji>.  Wouldn't the bigger surprise be if he only had one?  Still ir was 2015 if this happened. How much more humiliation can Melanoma take?

Are not the Enquirer's stories are usually about cheating, bastards and how celebrities are just like us?    Forgive me the cynacism, but is BLOTUS putting his dick in some chick's hole ever going to change anyone's mind about him?  The evangelical base has already supported him through Pussy Grabgate, Imprison Kidsgate  and Stormygate.  A few more dozen affairs will do nothing to sway that crowd.

No, our best hope lies with Weissleberg.  Maybe - just maybe - he's had enough of BLOTUS' anti-Semitism and will spill all the beans. Of course, that doesn't make up for the 38 years of being with this corrupt clan and his willingness to take on their degradation of the Jews.

Maybe a tide has turned. Maybe people will start flipping on these folks.  Now maybe we can find Kushner's achilles heel.

I am just so sick and tired of this shit show that Trump is putting on. Seriously. I just want to slap everyone who said "It will never get beyond this point..."

I mean Senator Imhoff, who is delusional at best, is blaming John McCain for being too confrontational withnthe President. Blaming a man peer in the Senate who just died becuase Trump can't seem to understand that there is a point that you stop being a total douche bag.

Oh, I saw Sen Beatoff's comment. McCain was an asshole, no doubt, but by comparison, there is no comparison.