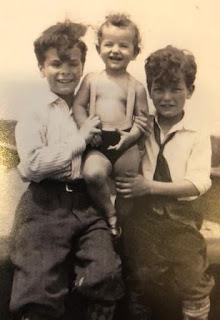 Yesterday was a weird day.

My 100 year old uncle Clete - the one we had a celebration for almost two months ago - had his funeral yesterday.

Well, he didn't have it. I mean, he was there and all, but hardly hosting the event.

How great is it that he lived to be 100?  How great that he has great-grandkids ranging in ages from 8 months old to some that are through college?

That leaves her the last of her family - us kids not included.

When you're 90, how does that not weigh on you?

My mother seemed fine with the death last week and even on the ride to the funeral. But when she got there, she kind of fell apart, but only for a part.. And Marge, her sister-in-law, whom she's known for 78 years, reach out to her and held her arm for the entire service.

She was teary during the service and quiet during the lunch afterwards, though most of my cousins and second cousins all made their way over to see her, which was nice, as she's not ambulatory enough to make the rounds.

I think it's the next few days or weeks that will be toughest for her. Clete and Tom pretty much raised her. All had kind words for their mother, but if those stories were true, she was a horrible mother.

Those boys couldn't go to a movie - or anywhere - without taking my mother. She was a toddler.  Or the time she was in her pram - and they had pram and baby in a boat on the Detroit River...........in winter!  The three of them made it sound fun and funny, but if you really think about it - and I've said it to all three - had it been today, Children's Services would have taken all three away from their mom.

A few days before I was having email and texts with some of them while simultaneously having a group texting session with the cousins on my father's side of the family.  Nothing like that has ever happened, nor do I expect to again.

Now it is up to me to help my mother into another transition of her life. I'd say I don't know what that might bring, but I think that would be a lie.  I have a pretty good idea.

would your mom come live with you or one of your siblings?

I am sorry for your loss. It was an insightful piece of writing.