Shout it Out Loud 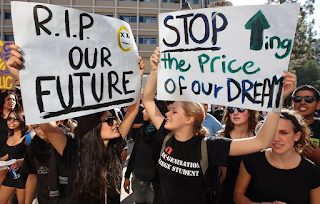 Of course, BLOTUS has said McGhan quit..........but then said something about his "decision" about McGahan.  So BLOTUS made a decision for McGahan to quit???

The top government official who oversaw the one TRILLION student loan market quit.  It's not just that he quit - it was the letter. It's a shame more folks didn't see this buried news item.

Besides Seth Frotman saying that the White House has "open hostility toward protecting the nation’s millions of student loan borrowers", he went on to say, “The damage you have done to the Bureau betrays these families and sacrifices the financial futures of millions of Americans in communities across the country.”

It isn't 100% clear if he was talking to BLOTUS or about BLOTUS via his budget director.  Either or.

The damage done to millions of Americans in communities across the country isn't just about Consumer Financial Protection Bureau. He's like King Midas - he ruins everything he touches. It's not all about you, Seth.  Geeeze.

Frotman alleges that the bureau buried the publication of data showing banks are ripping off college students with “legally dubious” debit card fees.

While unfortunate that Frotman isn't high ranking enough to get the press his thoughts deserve, I do hope that others who find themselves on the outs with this administration speak out publicly.


....and here's hoping McGahan spilled his guts to Mueller and his team.

Way back 50 or so years ago there was a Hollies song, only a moderate hit by their standards here but a good one nevertheless, called 'King Midas in Reverse' - "Everything he touches turns to dust".