At Least That's What You Said 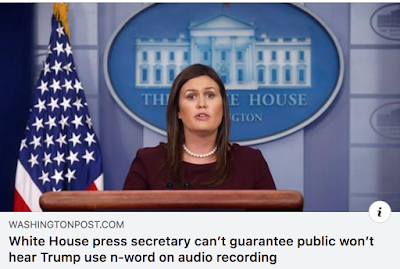 Oh for fucks sake people - it's not a matter of 'if' or even 'how often' BLOTUS "might" have said the n-word.

I believe the question on the table is: 'does it matter'?

The longer answer is, "no"

Those who voted for him already feel free to be as racist as they want, knowing that BLOTUS is too - and now have zero hesitation about saying 'the word'. .....and meaning it.

I mean, you have seen all the videos of black folks filming white folks being white, right? Super white....and scared.

And folks who didn't vote or support BLOTUS, well, would this make them support him less?

See? This changes nothing.   Nor does the 'dog' comment.

I do love all their previous denials that the White House gave regarding things potentially said, and now it's a lawsuit about violating a non-disclosure agreement. While not a legal victory for Omarosa, it's hard to believe there are not things on tape this White House can't afford to become public.

Let's hope it's BLOTUS telling others how stupid his voting public is, though those folks are probably too stupid to grasp that, even if said to their face.

A boy can dream.

"Let's hope it's BLOTUS telling others how stupid his voting public is, though those folks are probably too stupid to grasp that, even if said to their face." - THIS!

The Deplorables will say it doesn't matter.

The evangelicals will say it doesn't matter because he said it before he was president and is a changed man.

It doesn't matter to the rest of us because it's something we already know.