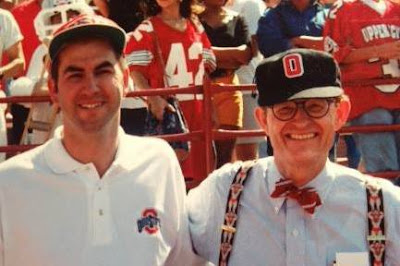 Allegedly I should be outraged that Urban Meyer is suspended for three whole football games.

The nerve of me for not being so.

Of course some Ohio State friends don't know I feel this way - I mean, why walk into that hornet's nest?

The most I know of it - again, I don't really care - is that one of Meyers' coaches smacked his wife around and Urban and his wife knew of it for three years and did nothing. Allegedly.

Allegedly enough that an "investigation" got him suspended for three games. THAT has to put a huge dent in his $7.6 MILLION dollar salary. Looks like he'll be living on Ramen for a while. And nothing but trips to Aldi for him.

Facebook friends and OSU alumni are up in arms I tells ya.  The unfairness of it all. He couldn't have possibly known, says they . ......except that Urban himself said he "counseled" the couple.   Of course, they says, the victim (you know the wife...........not the fans),  is a known liar.  You know, because they all know her.

This is why my eye lids are black and blue. Not because Zach Smith beat me too.  No, it's because I roll my eyes so hard at this shit.

Replace the words "Urban Meyer" with "Joe Paterno" and I can guarantee you the same people defending Meyer would be denouncing Paterno.

I dare someone to make the argument that beating your wife is less worse than child rape.  I mean, when I write it, sure it sounds worse, but I'm not sure you can sell it to woman who has been beaten and lives in fear of it happening again.

Paterno's take down was the same as Meyers. They didn't rape boys or beat women (well, that we know of!), but they knew about it and let it slide for the "love the game", the roar of the crowd.   .....oh, and the $7.6 MILLION dollar paycheck.

In a past life, I worked enough with the Ohio State Athletic Department to know that things are not created equal.  Remind me to tell you of the basketball recruit who got a 12 (!!!) on his ACT, but on his second try got a 32!.  Yeahhhhhhh...........I guess he just had an off day.

I've never understood the devotion to this game of football - be it college or pro. It's just a game and in the end, unless you're getting that paycheck, it has very little baring on much of anything.

.....except for one time when I got to see Mike Vrabel in the locker room.   TOTALLY worth it.

I don't give five fucks about football, both pro and college. yeah, it's nice that my team won the super bowl this year. and penn state can go to hell.

Regardless of the team, I find it awful winning is more important than justice.

I have never heard of Mike Vrabel until I read this post.

I googled his name and clicked on images.

Now, I have to change my shorts.

TOTALLY worth it is right.