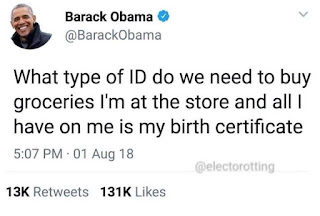 Oh how I love this man.

Remember when we thought 41 an out of touch fucktard for not knowing how much a gallon of milk cost?

Or that his running mate / VP didn't know how to spell 'potato' or even that Murphy Brown wasn't a real person?

It is a surprise to no one - at least with 1/16th of a brain - that BLOTUS could out-stupid both of them. He already didn't now that Frederick Douglass was dead.

And just yesterday, BLOTUS endorsed Ohio rep Steve Stivers in a special election  -  one in which Stivers isn't even running.  So..........there's that.

Of course, his biggest gaffe is the being thinking (no, that can't be the right the right word) that people get id'd buying groceries.

As if he'd ever walk into D'Agastinos to pick up some brillo pads, scallions and pork butt. If one would actually card him, it would be to check his weight, right? 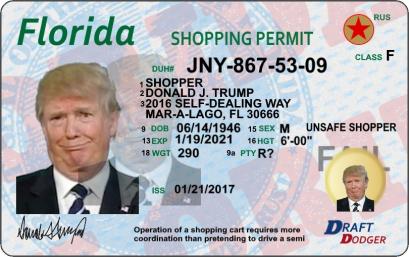 Mind you, his MAGA supporters, still waiting for those plush job the mexicans stole from them - are actually probably having to show a form of ID while they use their WIC cards and food stamps.

Oh irony, you never let me down!


I will hand it to Obama. He has remained fairly silent on the current administration's actions fuck-ups. I get that his commenting on stuff is a lose-lose scenario, but I love he couldn't help himself with that one tweet.  I mean, sure it's one of his interns or something, but still............
Posted by Blobby at 12:04 AM

Never a dull moment in the DMV (District, Maryland and Virginia.)

YAS BARACK! wish you were still the president...