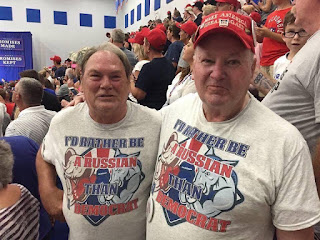 Normally, I might say, "this is where we are in this fucked up life", and were might have been there, but now it's a week later, so I'm sure we've gone to an even lower level.

To really piss them off, people should start insinuating the are a "couple".  Life partners. Longtime Companions. Homos. Butt pirates. ...and the one that would really steam them: "Faggots".

The joke they truly don't get?  We are 2.7 steps away from BEING Russia. So their wish is BLOTUS' command....or commandant комендант.

I'd love to see what job them mexi-cans have taken from their fat-fingered hands. Probably none, as it looks they aren't talented enough to pick lettuce for 12 hours a day, and couldn't clean a bathroom to even Taco Bell's standards if their lives depended on it.

Doubtlessly they can speak Russian too - fluently!

don't let your children inbreed; they will produce fucktards like these two.

Of all the tone deaf stupidity! These people (I use the term lightly) probably have parents and/or grandparents rolling in their graves right now.