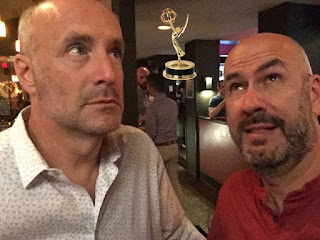 Somewhere between my third margarita and me Sammy Jo'ing his unfinished (too warm, he whined!) , and then the eventual beer, I somehow agreed to be Mike's (should I even bother linking a long forgotten about blog.....because he can't remember his password??) dessert enabler by doing the 2017 Emmy awards thingy.....no year...no trademark.

I'm not winning this one. I watch TV, but not Emmy TV.

While I know all contests (and friendships) are a game of chance, this one (the contest, not as much the friendship....though it is always on shaky ground) is a complete shot in the dark.

As mentioned, this is just a way for Mike to get dessert delivered to his door, because he cannot be bothered to go to 7-11 for his 3-pack of Suzy-Qs.


The Emmys are Sunday night. Winner will be announced on Tuesday.

Out of all of these shows, the only one I watch is Drunk History. I don't watch award shows but I do enjoy the Fashion Police the day after. I'm old. Time to pull out my Starsky and Hutch dvds.

Third margarita? Who was counting? And me thinks he doth protest too much - it was actually Blobby who threw down the gauntlet for as he calls it “Emmy awards thingy”. He is a glutton for punishment, no news to regular readers. And while we never discussed what prize I (i mean, “the winner”) would receive for this year’s contest (I was thinking cold, hard cash), it looks as though Blobby has decided that he (I mean, “the loser”) will provide a dessert of choice to the winner. Fair enough. I’m game.

And while Blobby has copped to his ballot being full of 100% guesses, I spend days doing deep investigative work. Let’s see if my efforts pay off (again). Here goes:

Drama series: Stranger Things. We watched about three episodes before decided we were done. But it seems to be all the buzz, so there’s that.

Actor drama series: Sterling K. Brown, because I wish that was my name.

Supporting actress: drama series: Thandie Newton, or because maybe I wish THAT was my name.

Actor comedy series: Donald Glover, because it’s what all the tab are predicting. I didn’t know a show called “Atlanta” existed.

Actress comedy series: Julie Louis-Dreyfus. I don’t know why I don’t watch this show regularly. I’ve seen a couple of episodes on plane trips and I love JLD. Perhaps too much competing content on The Food Network?

Supporting actor comedy series: Alec Baldwin. Too good of a role not to be rewarded.

Limited series: Big Little Lies — I think my short attention span is kicking in. This was another one - like Stranger Things - that after three episodes I said “meh”. Or perhaps I knew that Trisha Yearwood was rustlin’ up some grub over on The Food Network.

Actor limited series or movie: Robert DeNiro, because make my words — he’s gonna make something of himself one day.

Supporting actor limited series or movie: Alexander Skarsgard, because, no really, I wish THAT was my name.

Actress limited series or movie: Nicole Kidman, because Blobby went with Reese Witherspoon. But part of me feels icky about not picking Jessica Lange for this category…

Oh, and about Blobby's choice of photos for his Emmy post? I don't recall a giant Emmy award floating behind us, but after a third cocktail, stranger things have happened at Club Cafe/Club Sashay/Club So Gay.

Time to pull out my Starsky and Hutch dvds.