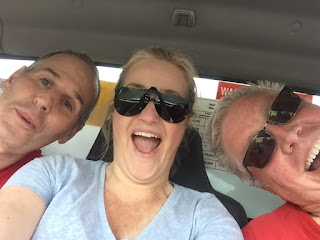 While sometimes it is hard to see the good in disasters like Hurricane Harvey Fierstein or the impeding Irma LaDouche.

Well many people. Not all of them.

Friends, Andrew, Becky and Sam are three such folks.

Taking almost no time off from work, they coordinated getting supplies - personal hygiene, clothes, medical supplies, etc - rented and loaded a truck and drove it from Ohio to Texas.

After unloading, they immediately turned around and drove back.

They kind of make you feel like you're a worthless turd in a situation like this - don't they?  Cause I kind of do.  Most people talk. They actually did.

The three had trouble with the truck rental.  I'll let Becca relay the story....via a Facebook entry.

But if the latter, even meth dealers have a heart.

On the Irma front - a friend of mine, Tim, thought he and his husband would ride out the storm in Miami.  Ruckiry (not Jon's boss), he finally came to his senses and took an excruciatingly slow commute / evacuation up to Orlando....of all places.

I suppose it's dead center where you won't get water from either side of America's wang. But Tim was one of thousands who had this idea. There are nothing but fleabag motels (not even hotels!) left....and that was yesterday. Probably nothing available today at all.

I do love seeing how Marco Rubio and Ted Cruz want handouts. The fucking freeloading Socialists.

THEY could learn a thing or two from Bo.  ....and Sam, Becky and Andrew.

Aw thanks blobby! I wish you coulda gone with us - oh the laughs! And no shit about the money - I kept expecting that cash to blow up and spray blue dye all over me! (Took it anyway)