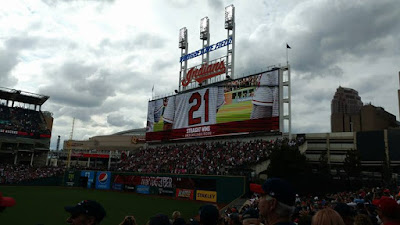 I have been hesitant to write this - and I'm about 86% sure this will be my downfall.

Yesterday, the Cleveland Indians won their 21st game in a row.

Actually, there should be exclamation points with that last sentence. A lot of them.

While we've been in first place in our division for almost all of the season, this is a real feat.

21 consecutive games is an American League record. "We" beat Oakland's 2000 record (as seen in the movie, Moneyball) of 20 games.

...but that's just the American League. The National League has 26.....with those stupid non-existent New York Giants.

This is where writing about this, I fear I've jinxed it all.   Even the "fake news" NYT titled the win: "Ho Hum".  Maybe it was tongue in cheek, or maybe it was a big 'fuck you'. .....because that's what I'm saying to that failing paper.

my team's radio guys were talking about your winning streak last night; go for the prize, tribe!

my team ain't going nowhere but the basement AND we have the worst record in baseball (go phillies).

gonna be an interesting playoff month.

Congrats!
My team is only one step off of the basement floor.
New York Giants? Baseball? I am definately missing some reference.

The only baseball I enjoy is in movies. Guess it's time to watch Major League for the umptieth time.

gonna be an interesting playoff month.