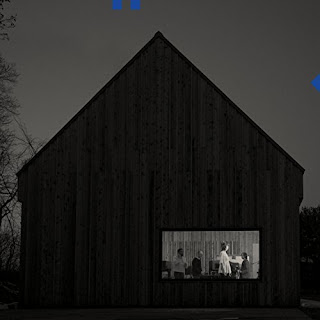 I've noticed with their last three disks, that Arcade Fire and the National are on similar release schedules. Perhaps it is coincidence, perhaps not. I'd say it would be nice if they spaced out their disks so we'd have something new(er) to get to more than every 3-4 year.   ....I say that, and then I think of how bad the new Arcade Fire disk is.

The National fair much better with Sleep Well Beast.

Is it Boxer or High Violet?  No.  But it doesn't suck........and right now, that holds more weight than it should.

Like Arcade Fire, the band released four songs prior to the album release. Unlike Fire, these were not all misfires. And as I found out with Trouble Will Find Me, I have to spend time with a National disk (sometimes) to start to appreciate what might initially seem mediocre.

First off, Bryan Devendorf still makes me smile with his drumming. There is nothing over the top about it in the slightest, but it is possibly even more expressive than Matt Berninger's vocals.

The band straddles their standard approach with some experimentation, and with varying degrees of success. It took me a while to warm up to "the System Only Sleeps in Total Darkness".  I think Bryce Dressner really does some guitar work he hasn't attempted before. It works.

I wish "Turtleneck" had been half as interesting as its first 30 seconds, but it kind of falls apart. Berninger does hysterical (not ha-ha funny) angst, but it doesn't seem to fit.  "Walk it Back" works, with its spoken word and voice modulator stuff.

They certainly stretch a bit with "I'll Still Destroy You" and it's almost disconnected musical interludes that work around Berninger's singing. You don't think it would work, but it actually does.

I'm digging "Dark Side of the Gym", which actually has guitar work that is more than reminiscent 60's beach movie music (and it has Lisa Hannigan too!).  At first I thought "Nobody Else Will Be There" was too well timed....too understated. It took a while, but it is a great song, though not sure it's the song to lead off the disk (or open their concert), but they do. Don't know why, but love how Berninger phrases "hey baby" during it.

Their experimentation doesn't quite work with the title / closing track. There are times in their entire discography where Berninger sing/talks, but this is just talk/talk. The music is more adventurous than the vocal or lyric, but it's a song for an outtake album.

While many of their disks have used horns, there are more strings here than in the past. And piano / keyboards seem to be more prevalent as well ("Carin at the Liquor Store" which is good - even with the clumsy John Cheever reference). Still there is the familiar too keep the folks who need that:  I like "Guilty Party", "Born to Beg".

It could be wrong, and it might take time, but I don't see defining moments with most of these songs - no "Brainy", "Ada", "Conversation 16".......but Sleep Well Beast is a good album. And sometimes good is good enough.
Posted by Blobby at 12:02 AM

Really love your post and you always put something that is unique and interesting, keep posting stuff like this and I really appreciate your work.