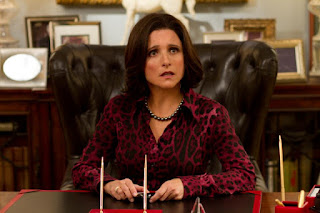 You know, even as a fictional, extremely foul-mouthed, narcissistic, self-absorbed and wildly inappropriate president, Selina Meyer was still a better commander in chief than the one currently occupying 1600 Pennsylvania.

Like SCROTUS, she has a bumbling, inept press secretary. And a butt-load of advisers who give her nothing but bad advice for their own gain.

Unlike SCROTUS, Meyers has only been married once...and only one child from that marriage. She doesn't quite tramp around like you-know-who.

Julia Louis-Dreyfus couldn't be better for the role. I don't believe anyone else could have ever pulled that off. She deserves every Emmy, People's Choice and Golden Globe for which she's nominated.

Unlike SCROTUS - Louis-Dreyfus is a friend to the environment.......and the normal people.

The joke is, she might be almost as rich as Dump himself. With her father dying a few months back, Julia is now probably worth billions............with a 'b'. Not that she hasn't done fairly well on her own.

But with that money, you'd think one could get more like a SCROTUS........but not the tv kind.

Yesterday, JLD announced she had breast cancer. And while that is sad on any number of levels, it's how she announced it that makes all the difference between her fictional employment and the real thing. 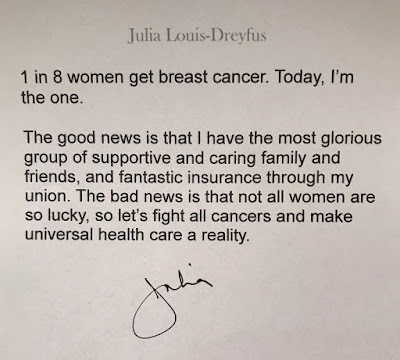 Yes, in a time of a personal health crisis, Louis-Dreyfus doesn't think only about herself.

Granted, her character wouldn't have, but that is fiction. The problem is the real president doesn't think of others when it comes to health......or disaster.......or...........(fill in the blanks).

I take it back. If he got cancer, he'd think of others......and blame it on them. Crooked Hillary being the first. Obama being the second. And Comey being the third.  The list would go on and on.

Here's hoping JDL gets better, as there is no chance of recovery for Dump.


Song by: John Mellencamp
Posted by Blobby at 12:04 AM