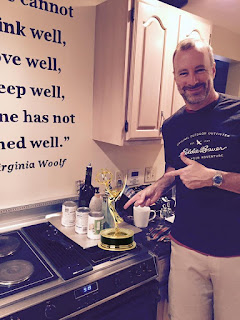 Ok....ok......I drafted part of this before the televised event, so I had to use a strikethrough, though I could have just deleted.

The 'you' in the title refers to me, of course. I'm not sure how many more loses I can endure, though I think Mike seems to like keeping me around for this reason only.  ....and I buy the drinks.  Probably in the reverse order.

The television academy has spoken, and folks.........THIS is what a virtual sweep looks like.

Mike and I chatted during the telecast, but it wasn't as lively as previous shows. I dare say, neither of us were as witty as usual, though I'm all sure he'd claim he was.  (pssssst........he wasn't.)

He took an early lead - two of the first three categories - and kept it.

I know I said this contest was a game of chance, but even I have better luck at roulette. And I know that Mike's were all guesses as he didn't even know many of those shows for which he voted, and he is so short attention span (see, what I did there?) that he has never actually finished VEEP, Master of None, Little Big Lies (hell, I didn't even start that), or I dunno....Three's Company (though I hear he's an avid fan of the Ropers).

That Mike is a kind soul though - so don't believe everything you read on-line about him. He says we can go double-or-nothing for the Oscars, so I don't have to pay up now.

However, I did ask him what double amount of cookies looked like, other than diabetes and a 38" waist.   (though you know I will win the Oscar race only because that means I get the 'nothing'.  Balls!)

.....I'm still waiting on that response.

Song by: Kelly Clarkson
Posted by Blobby at 12:03 AM

Oh Blobby. How you do go on (and on). A virtual sweep, you call it? Hmmm....does that mean the same as a "trouncing"? Haha I kid because i know you can handle it. And just want to correct one point. I was witty (perhaps wittier than usual) during our IM exchange throughout the telecast. And it seemed you were struggling to keep up. It's all good, my friend...all good. The Oscars telecast is months away...perhaps you start doing some research now? (hint, hint). I am pulling for your to win next time!