In the meantime - and in the West Wing - I'm just assuming evil is afoot and no one is watching.... again.

On the off chance that there isn't extra secret plotting, planning and scheming going on, my original post still pretty much stands.

Still there ain't a person not talking about it.  ....and of course by talking, I mean posting a lot of inane things on facebook and twitter.  I'm taking friends, "friends", sports figures, politicians, "celebrities" etc. Everyone has something to say.

The problem is, few have anything relevant to say......unlike, say, me!

The predictable right folks who trotted out veterans who thought it was horrible that they fought only to have the flag disrespected.  The predictable left trotted out veterans who said they served so that people could exercise their right to protest or express themselves. They cancel each other out in certain ways - though neither side is ever gonna buy the other's point of view.

The fireable offense is new.....and laughable.  Rape is fine (grab her by the pussy!). Attempted murder is fine. Domestic abuse is right on point. Dog fighting - awww....give the poor felon a second chance! Kneel instead of stand? Throw the bum out for life!

But logic and reason isn't really a thing now, so you just have to roll with the punches.....though I won't stop trying to bring some semblance of recent history to make someone scratch their head and kind of go, "ohhhhhhhh".

I'm just not wagering on it. 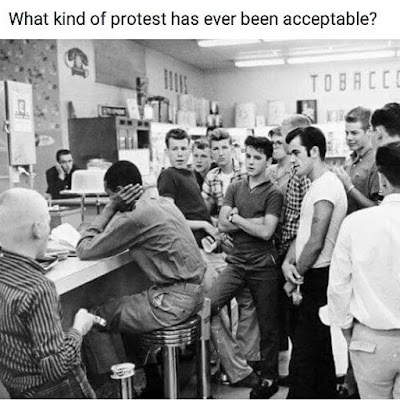