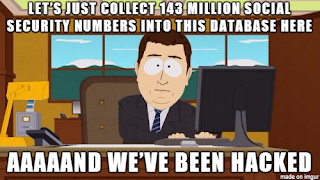 Honestly, I've been trying to bury my head in the sand on this whole Equifuck debacle. But returning home on Sunday, 710 brought it up.

Yes, he went a-checkin' and found out we'd both been compromised.

So that's the second time in as many years (give or take) that I've been hacked. This is beginning to get old.

Equifuck at first said they'd give free protection for a year, but you'd waive your right to sue them. They relented after a media shit storm, so now you can sue them and sign up for their pseudo-protection.......as their service worked so well for them in the past.

I won't personally sue them, but if there is a class action one, I'm happy to hop aboard that train.

So now whatever didn't have a fraud alert is now going to get one. The stories on the larger impact - is depressing. I can't change my birth date or SSN. I suppose I could petition the state to get a new driver's license number.....but I've had RUxxxxx for years.

I love that someone had the nerve to deduce that maybe there was no hack at all, and that everyone is putting their personal info into Equifuck to see if they were victimized, only to have that entry siphoned off to identify theft.

I guess I'll start reaching out to places tomorrow to start a more secure me.


Song by: Laurie Anderson
Posted by Blobby at 12:06 AM